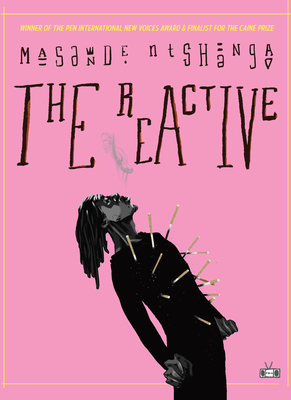 
*One of the Best Books of the Year 2016 --City Press, The Sunday Times, The Star, This is Africa, Africa's a Country, Sunday World

Heralded in the author's native South Africa as the hottest novel of the year, The Reactive is a clear-eyed and compassionate depiction of a young HIV+ man grappling with the sudden death of his younger brother, for which he feels unduly responsible.

Lindanathi and his friends--Cecelia and Ruan--make their living working low-paying jobs and selling anti-retroviral drugs (during the period in South Africa before ARVs became broadly distributed). In between, they huff glue, drift in and out of parties, and traverse the streets of Cape Town, where they observe the grave material disparities of their country. A mysterious masked man appears seeking to buy their surplus of ARVs, an offer that would present the three with the opportunity to escape their environs, while at the same time forcing Lindanathi to confront his path, and finally, his past.

The Reactive is] a searing, gorgeously written account of life, love, illness, and death in South Africa. With exquisite prose, formal innovation, and a masterful command of storytelling, Ntshanga illustrates how some young people navigated the dusk that followed the dawn of freedom in South Africa and humanizes the casualties of the Mbeki government's fatal policies on HIV & AIDS. --Naomi Jackson, Poets & Writers

Masande Ntshanga is the author of the novels The Reactive and Triangulum. He is the winner of the Betty Trask Award in 2018, the inaugural PEN International New Voices Award in 2013, and a finalist for the Caine Prize in 2015. He received a Fulbright Award, an NRF Freestanding Masters scholarship, a Civitella Ranieri Fellowship, and a Bundanon Trust Award. His work has appeared in The White Review, Chimurenga, VICE, n + 1, and Rolling Stone Magazine. His debut novel, The Reactive, was longlisted for the Etisalat Prize for Literature and a finalist for the Sunday Times Barry Ronge Fiction Prize. He was born in East London, South Africa, in 1986 and graduated with a degree in Film and Media and an Honours degree in English Studies from UCT, where he became a creative writing fellow, completing his Masters in Creative Writing under the Mellon Mays Foundation.
Loading...
or support indie stores by buying on