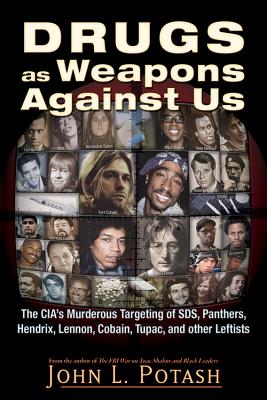 Drugs as Weapons Against Us (Paperback)

Drugs as Weapons Against Us meticulously details how a group of opium-trafficking families came to form an American oligarchy and eventually achieved global dominance. This oligarchy helped fund the Nazi regime and then saved thousands of Nazis to work with the Central Intelligence Agency. CIA operations such as MK-Ultra pushed LSD and other drugs on leftist leaders and left-leaning populations at home and abroad. Evidence supports that this oligarchy further led the United States into its longest-running wars in the ideal areas for opium crops, while also massively funding wars in areas of coca plant abundance for cocaine production under the guise of a “war on drugs” that is actually the use of drugs as a war on us. Drugs as Weapons Against Us tells how scores of undercover U.S. Intelligence agents used drugs in the targeting of leftist leaders from SDS to the Black Panthers, Young Lords, Latin Kings, and the Occupy Movement. It also tells how they particularly targeted leftist musicians, including John Lennon, Jimi Hendrix, Kurt Cobain, and Tupac Shakur to promote drugs while later murdering them when they started sobering up and taking on more leftist activism. The book further uncovers the evidence that Intelligence agents dosed Paul Robeson with LSD, gave Mick Jagger his first hit of acid, hooked Janis Joplin on amphetamines, as well as manipulating Elvis Presley, Eminem, the Wu Tang Clan, and others.

John L. Potash is the author of The FBI War on Tupac Shakur and Black Leaders. His work has been published in the Baltimore Chronicle, the City Paper, Covert Action Quarterly, Rock Creek Free Press, and Z magazine. He lives in Baltimore.


Praise For Drugs as Weapons Against Us: The CIA's Murderous Targeting of SDS, Panthers, Hendrix, Lennon, Cobain, Tupac, and Other Activists…

"Both well-researched and an exhilarating read, Drugs as Weapons Against Us exposes the dark history of the state’s use of drugs as both a tool of imperialism abroad and of social control at home." —Kara Dellacioppa, chair of the Sociology Department, California State University; author, This Bridge Called Zapatismo; editor, Cultural Politics and Resistance in the 21st Century

“In my first radio interview, Frank Zappa told me the CIA was distributing LSD to the hippies. [Drugs as Weapons Against Us is] Unbelievable! Just a compelling story!” —Allan Handelman, Rock Talk

"Awesome guest [John Potash]… is going out on a limb. This is a book that if you’re interested in the manipulation of the population, you’re going to want to get. This is the kind of book I just crave.” —Joyce Riley, The Power Hour

“When Lennon met semi-privately with media guru Marshall McLuhan in late 1969, McLuhan let Lennon know he was a ‘useful fool,’ and The Beatles were [used] for psychological warfare… in popularizing drugs. Lennon stormed out but came back a few hours later to learn more. [Drugs as Weapons Against Us] is exhilarating and well-researched… with startling revelations… definitely worth the read!” —Richard Syrett, The Conspiracy Show

“The CIA have used drugs as weapons against Americans… to control people or pacify dissension against the official status quo—the government’s war policies… We should not delude ourselves that U.S. Intelligence has repented and would never repeat these operations… Many people still look at the rapid rise of the hallucinogenic use among these popular Sixties rock stars such as The Beatles, Rolling Stones and Jimi Hendrix as positive contributions—I don’t—to the Sixties idealism—It wasn’t—about the world’s possibility for peace, love and global cooperation—that’s naïve. Nevertheless, we barely consider the possibility that such pacifist views were the intention of U.S. Intelligence agencies, and the CIA and its moneyed interests had a role in creating the Sixties subculture and [leading them to] dropping out and leaving behind radical dissent and protest. [John Potash has] covered so much in [his] research… we appreciate his work.” —Gary Null, WBAI 99.5 FM

“The book is amazing!” —David Clyde, The Wild Side 990AM WBOB, Rhode Island

“This is a marvelous book!” —John B. Wells, Caravan to Midnight and former host of Coast to Coast AM

"I really think [Drugs as Weapons Against Us] is a fascinating compendium of… what the CIA was doing... regarding manipulating our minds… targeting a lot of famous celebrities, musicians. [John Potash is] an author I really recommend you read… definitely read Drugs as Weapons Against Us." —Sean Stone, Buzzsaw on The Lip TV
or support indie stores by buying on
(This book is on backorder)
Copyright © 2020 American Booksellers Association