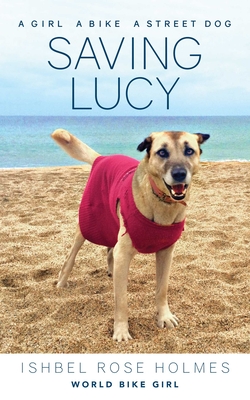 A Girl, a Bike, a Street Dog

★★★★★ This story grabs your heart and never lets go.

Saving Lucy is the true and inspiring story of two creatures in need of healing and rescue--who find home in each other.

Ishbel Rose Holmes was adrift and alone when she set out to bicycle across the world. She was pedalling across Turkey when a street dog, Lucy, crossed her path and changed her life forever.

Ishbel did not want anything or anyone to slow her down, but when she witnessed Lucy attacked by other dogs, Ishbel rescued her--forming a deep bond between the pair. Ishbel recognized her own vulnerability in her new canine friend and launched a heartfelt mission to find Lucy a home and give her a happy life.

Their adventures took them over 1,000 miles to the Syrian border and into the hearts of everyone who met them. People around the world who followed the story on Ishbel's blog, World Bike Girl, watched as Lucy's unconditional love broke down the wall around Ishbel's heart.

Ishbel Rose Holmes, aka "World Bike Girl," is British-Iranian writer and a daredevil adventurer. In 2014, she set off to cycle the world and has so far pedalled across 16 countries in Europe and South America. She is currently on a 6,000 km adventure through the Amazon jungle. Ishbel cycles with a dog trailer that she uses to rescue animals as she pedals. Working together with her thousands of big-hearted and loyal followers, Ishbel makes sure that injured cats and dogs get the correct medical care, then she looks after them until they find a home.Ishbel uses the bicycle as a platform to campaign for women's rights, especially for those in Iran. Ishbel became one of the principal campaigners for the online hashtag campaign #IranianWomenLoveCycling after Iran's Supreme Leader issued a religious ban on women cycling in public in 2016. Before cycling the world, Ishbel was a velodrome sprinter for the Iranian National Women's Team. Her racing pedigree in the UK includes her role as a Scottish Institute of Sport Athlete, Glasgow Life Athlete, and British Masters Track Champion. Before racing on velodromes, Ishbel spent many years road racing all over the UK.
Loading...
or support indie stores by buying on