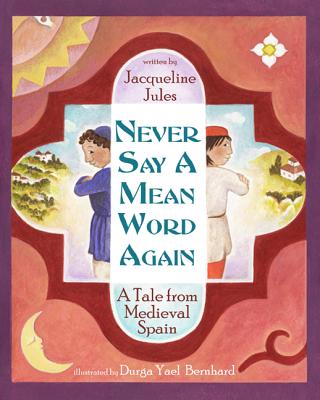 A Tale from Medieval Spain

No one ignores the grand vizier. The most important advisor in the royal court, he was considered the wisest man in the kingdom. He was also Samuel's father. "Make sure Hamza never says a mean word to you again," he had ordered Samuel. What should Samuel do? He couldn't disobey his father. But how would he make sure that Hamza never insulted him again? Perhaps train a monkey to hold Hamza's lips closed, or give him some lemon juice to make his mouth pucker? Inspired by a powerful legend of conflict resolution in Muslim Spain, Never Say a Mean Word Again is the compelling story of a boy who is given permission to punish an enemy. What will he do?

Jacqueline Jules is the author of over two dozen books for children including the award-winning Zapato Power series and Unite or Die: How Thirteen States Became a Nation. A former school librarian and teacher, Jacqueline enjoys visiting schools to share her passion for reading and writing. She is a word person, who loves rearranging words on the page, the same way people have fun fitting the pieces of a jigsaw puzzle together. She lives in Arlington, Va. Durga Yael Bernhard was raised in New York's Hudson Valley and began painting at the age of 13. Ms. Bernhard is the illustrator of numerous award-winning children's books, including fiction and non-fiction, natural science titles and multicultural folktales. Ms. Bernhard is also a children's teacher of Hebrew, Judaics, and illustration. She lives in the Catskill Mountains in New York.
or
Not Currently Available for Direct Purchase
Copyright © 2020 American Booksellers Association