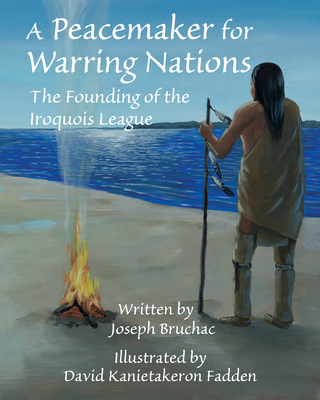 A Peacemaker for Warring Nations

The Founding of the Iroquois League

"The League of the Iroquois was a true representational democracy-so much so that the United States Constitution is said to have been modeled on some of its tenets. But how, perhaps a thousand years before the time of Columbus, did the Five Iroquois Nations (the Mohawk, Onondaga, Oneida, Cayuga, and Seneca) come to end the bitter eye-for-eye warfare among them? What brought them together in an alliance based on the Great Law of Peace? And how was it that a system of Clan Mothers was instituted in which women are seen as the center of the nation and still today choose the 50 royaners, or peace chiefs, who speak for their respective communities in meetings of the League? In A Peacemaker for Warring Nations, renowned Native author Joseph Bruchac draws from the teachings of both contemporary and past Iroquois tradition bearers in telling the inspiring story of how "the Peacemaker," a divine messenger sent by the Creator, helped to bring reconciliation to warring nations. The book is beautifully and accurately illustrated by David Kanietakeron Fadden, a respected Mohawk artist whose work honors his deep indigenous roots"--

Joseph Bruchac is a world-renowned Native author of over 170 books. His poems, stories, and essays have appeared in over 500 publications over the past five decades. He is co-author, with Michael Caduto, of the million-selling Keepers of the Earth series and Code Talker: A Novel about the Navajo Marines of World War Two. An enrolled member of the Nulhegan Abenaki Nation, he works with his sons to preserve and teach Native traditions and language at their Ndakinna Education Center. Joseph lives in Greenfield Center, New York. David Kanietakeron Fadden is an Akwesasne Mohawk artist whose illustrations have appeared in several books, including Skywoman: Legends of the Iroquois, as well as in the Discovery Channel's, "How the West was Lost: Always the Enemy." His work has been exhibited at the Smithsonian Institution's National Museum of the American Indian. David lives with his family in Kawenoke, at Akwesasne Mohawk Territory, in Ontario, Canada.
Loading...
or support indie stores by buying on