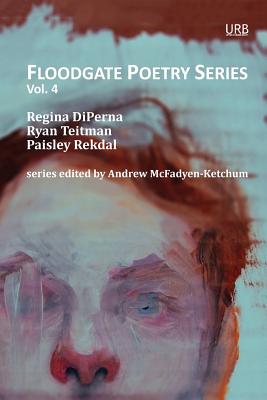 Regina DiPerna's first collection of poems, A Map of Veins, tells the story of the death of a lover and her healing process. In these elegies, DiPerna faces the guilt of finding new love, death taunts her years after the fact with postcards and gifts, and memory haunts her dreams.

Jesuits, Ryan Teitman's second collection, explores childhood, fatherhood, and the holy spirit in rich lyrical verse and prose. In often surreal poetry and prose, Teitman's mother appears as a curtain in the window, he wears a shadow for a suit, and plays on the train tracks with a child version of his father.

Paisley Rekdal's fourth collection of poetry, Philomela, unabashedly parallels the myth of Philomela with her own experience with violent sexual assault in a combination of verse and lyric essay. In these brave, somewhat experimental verses, Rekdal challenges the definitions of sexual harassment, sexual assault, and rape as she parses out her own experiences with them.

It's the fourth volume in the Floodgate Poetry Series, edited by Andrew McFadyen-Ketchum. Chapbooks--short books under 40 pages--arose when printed books became affordable in the 16th century. The series is in the tradition of 18th and 19th century British and American literary annuals, and the Penguin Modern Poets Series of the 1960s and '70s.