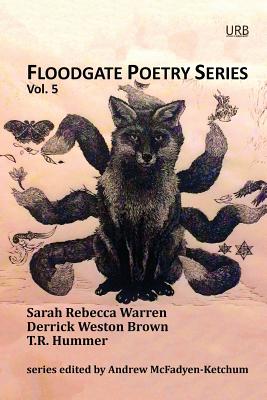 This is the fifth volume in the Floodgate Poetry Series, edited by Andrew McFadyen-Ketchum. Chapbooks--short books under 40 pages--arose when printed books became affordable in the 16th century. The series is in the tradition of 18th and 19th century British and American literary annuals, and the Penguin Modern Poets Series of the 1960s and '70s.

Sarah Rebecca Warren is a writer, educator, and musician. She lives in Norman, Oklahoma and teaches for Oklahoma State University. Sarah received scholarship to study at the Sewanee Writers' Conference in 2016, and her writing has appeared in Oklahoma Today, Gravel, Luna Luna, and other journals. Her poems "Anatomy of an Eating Disorder" and "Chimay Mercado" won first place in the Arcturus Fall 2017 Poetry Contest, adjudicated by Ruben Quesada. Sarah is a regular contributor for World Literature Today.

Derrick Weston Brown holds an MFA in creative writing, from American University. He has studied poetry under Dr. Tony Medina at Howard University and Cornelius Eady at American University. He is a graduate of the Cave Canem and VONA Voices summer workshops. His work has appeared in such literary journals as The Little Patuxent Review, Mythium, The Tidal Basin Review, and Vinyl Online.

Terry Randolph Hummer is an American poet, critic, essayist, editor, and professor. His most recent books of poetry are After the Afterlife and the three linked volumes Ephemeron, Skandalon, and Eon.