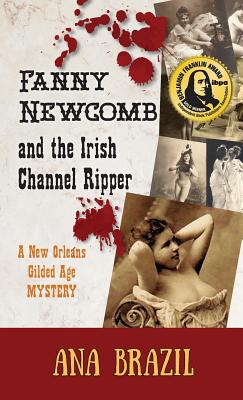 Twenty years after the devastating Civil War, the city of New Orleans teeters on a dangerous social precipice: Will it succumb to the poisonous influence of gamblers, prostitutes, murderers, and pornographers? Or will it claim a bright future built upon the high ideals of education, culture, and political justice?

In this Gold Winner of the 2018 Independent Book Publishers Association Benjamin Franklin for Historic Fiction, twenty-five year old Fanny Newcomb is proud to hope and work for a more enlightened New Orleans. The daughter of a recently-deceased lawyer, she yearns to be a lawyer too, but her poverty forces her to live and work in the rough Irish Channel neighborhood. There, she takes a job teaching typewriting and business classes at the grand, new Wisdom Hall settlement house.

Huddled along the Mississippi River just south of Canal Street, the Irish Channel is home to the city's struggling Irish and German immigrants. While Channel men toil daily to make a living wage, many of the Channel girls and women are forced to prostitute themselves to stay alive. Very few of them have time for classes at Wisdom Hall.

Wisdom Hall founder and principal Sylvia Giddings--privileged daughter of an uptown family--wants to educate and help the women of the Irish Channel escape their predictably restricted futures. But Sylvia's attempts to enlighten the tradition-bound immigrants are patently unwelcome and she struggles to find and keep her students. And Sylvia's life would be so much easier if Fanny Newcomb stopped challenging her authority

Fanny's hopes and hard work soon collide with reality when her most promising business student is murdered in the Irish Channel. Not only murdered, but slashed and ripped to shreds, just like Jack the Ripper's London victims were months earlier.

Sylvia's German carpenter is quickly arrested as a Ripper copycat, but Fanny realizes just as quickly that the carpenter is not the killer. Desperate to know what happened to her student, Fanny Newcomb launches into a hunt for the self-proclaimed Irish Channel Ripper. Fanny knows that she has the skills to identify the murderer; she just has to work hard and smart. Fortunately, she is not above spying, lying, or stealing, if it helps her secure information and know the truth.

Letters from the Ripper are posted on streetlamps and published in the newspapers. Each letter promises another brutal slaughter in the Irish Channel. The women and girls of the Channel--especially the students of Wisdom Hall--cower in fear.

Fanny enlists Sylvia and Olive in her quest to find the murderer, and together they identify six men who could be the Irish Channel Ripper. The women pursue each suspect through New Orleans' churches, cemeteries, hotels, and houses of prostitution.

But Fanny's hunt for the Irish Channel Ripper infuriates her father's former law partner Lawrence Decatur. It's bad enough that Fanny wants to practice law and refuses to marry him, but rooting out a murderer goes against everything a proper woman should cherish Very reluctantly, Lawrence agrees to assist Fanny in her investigation.

Talented Irish Channel police detective Daniel Crenshaw is both alarmed and awestruck by Fanny's persistence. After much frustration, Fanny and the detective declare a delicate truce and attempt to work together. Can this partnership make the difference?

Can Fanny Newcomb stop the Irish Channel Ripper before he kills again?