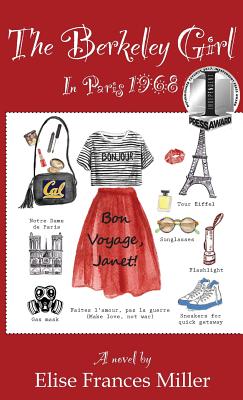 Shy Janet McGill goes off to Berkeley in 1967 with her good grade point average and a boyfriend on campus. She doesn't consider world events. Then comes total awareness of the Vietnam War. She watches in horror as her family celebrates her brother's new military status. Her boyfriend Aaron Becker is draft deferred--as long as he stays in school--but his future has been dimmed. A feeling of doom permeates the college campus. On the verge of heartbreak, Janet joins some anti-war protests. When her parents see a photo of her in their hometown paper, Janet's mother decides that the spring of 1968 would be a ﬁne time to send Janet to Paris. Anything to get her away from those Berkeley radicals Little did the family know that Janet would run headlong into the 1968 May Revolution and disappear.

The Berkeley Girl: In Paris, 1968 brings to life the historical "Events of May," in which over ten million French citizens were involved in the only student-worker-bourgeois alliance and "revolution" that a Western, capitalist democracy had ever experienced. Far from the distant and haunting City of Light, Aaron follows Janet's journey through an intense and embattled correspondence. He witnesses her wrenching, transformative exploration of love, responsibility, and sacriﬁce, and then loses contact as her "safe" year abroad turns into a dangerous coming of age.

Origins and Methods: Researching the Background, Constructing a Fiction