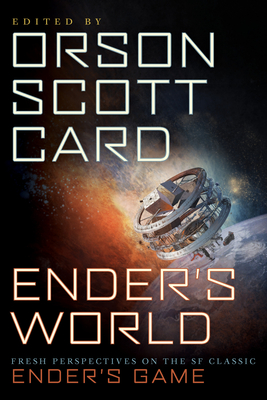 Experience the thrill of reading Ender's Game all over again Go deeper into the complexities of Orson Scott Card's classic novel with science fiction and fantasy writers, YA authors, military strategists, including: Ender prequel series coauthor Aaron Johnston on Ender and the evolution of the child hero
Burn Notice creator Matt Nix on Ender's Game as a guide to life
Hugo award-winning writer Mary Robinette Kowal on how Ender's Game gets away with breaking all the (literary) rules
Retired US Air Force Colonel Tom Ruby on what the military could learn from Ender about leadership
Bestselling YA author Neal Shusterman on the ambivalence toward survival that lies at the heart of Ender's story Plus pieces by: Hilari Bell
John Brown
Mette Ivie Harrison
Janis Ian
Alethea Kontis
David Lubar and Alison S. Myers
John F. Schmitt
Ken Scholes
Eric James Stone Also includes never-before-seen content from Orson Scott Card on the writing and evolution of the events in Ender's Game, from the design of Battle School to the mindset of the pilots who sacrificed themselves in humanity's fight against the formics

Orson Scott Card is the author of the novels Ender's Game, Ender's Shadow, and Speaker for the Dead, which are widely read by adults and younger readers, and are increasingly used in schools. Besides these and other science fiction novels, Card writes contemporary fantasy (Magic Street, Enchantment, Lost Boys), biblical novels (Stone Tables, Rachel and Leah), the American frontier fantasy series The Tales of Alvin Maker (beginning with Seventh Son), poetry (An Open Book), and many plays and scripts. Card was born in Washington and grew up in California, Arizona, and Utah. He served a mission for the LDS Church in Brazil in the early 1970s. Besides his writing, he teaches occasional classes and workshops and directs plays. He recently began a long-term position as a professor of writing and literature at Southern Virginia University. Card currently lives in Greensboro, North Carolina, with his wife, Kristine Allen Card, and their youngest child, Zina Margaret.
Loading...
or
Not Currently Available for Direct Purchase