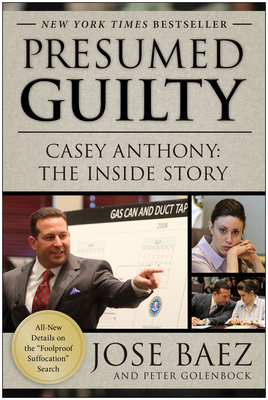 Casey Anthony: The Inside Story

New York Times bestseller Presumed Guilty exposes shocking, never-before revealed, exclusive information from the trial of the century and the verdict that shocked the nation. When Caylee Anthony was reported missing in Orlando, Florida, in July 2008, the public spent the next three years following the investigation and the eventual trial of her mother, Casey Anthony. On July 5, 2011, the case that captured headlines worldwide exploded when, against all odds, defense attorney Jose Baez delivered one of the biggest legal upsets in American history: a not-guilty verdict. In this tell-all, Baez shares secrets the defense knew but has not disclosed to anyone until now and frankly reveals his experiences throughout the entire case--discovering the evidence, meeting Casey Anthony for the first time, being with George and Cindy Anthony day after day, leading defense strategy meetings, and spending weeks in the judge's chambers. Presumed Guilty shows how Baez, a struggling, high-school dropout, became one of the nation's most high-profile defense attorneys through his tireless efforts to seek justice for one of the country's most vilified murder suspects.

Jose Baez is one of the most sought-after attorneys in the country. After successfully defending Casey Anthony in what became one of the nation's most high-profile trials, he took on the international case of Gary Giordano, which caught international headlines. Baez fought hard to successfully obtain Giordano's release from a prison in Aruba where he had been held for several months. Baez continues to practice criminal defense law, handling cases throughout the country, especially those involving complex forensic issues for which Baez has shown strong interest and expertise. Baez is fluent in Spanish and Portuguese, extremely active in various charitable endeavors in the Hispanic community, and enjoys traveling and spending time with his family. He currently has offices in Orlando and Miami, Florida. Peter Golenbock, one of the nation's best-known sports authors, graduated Dartmouth College in 1967 and the NYU School of Law in 1970. He has written seven New York Times bestsellers, including The Bronx Zoo (with Sparky Lyle) and American Prince (with Tony Curtis).
or support indie stores by buying on
(This book is on backorder)
Copyright © 2020 American Booksellers Association