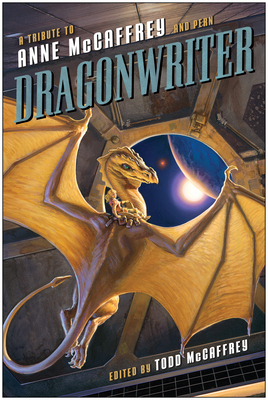 A Tribute to Anne McCaffrey and Pern

When Anne McCaffrey passed in November 2011, it was not only those closest to her who mourned her death; legions of readers also felt the loss deeply. The pioneering science fiction author behind the Dragonriders of Pern® series crafted intricate stories, enthralling worlds, and strong heroines that profoundly impacted the science fiction community and genre.

In Dragonwriter, Anne's son and Pern writer Todd McCaffrey collects memories and stories about the beloved author, along with insights into her writing and legacy, from those who knew her best. Nebula Award–winner Elizabeth Moon relates the lessons she learned from Pern's Lessa (and from Lessa's creator); Hugo Award–winner David Brin recalls Anne's steadfast belief that the world to come will be better than the one before; legendary SFF artist Michael Whelan shares (and tells stories about) never-before-published Pern sketches from his archives; and more.

Join Anne's co-writers, fellow science fiction authors, family, and friends in remembering her life, and exploring how her mind and pen shaped not only the Weyrs of Pern, but also the literary landscape as we know it.

Todd Johnson McCaffrey wrote his first science-fiction story when he was twelve and has been writing on and off ever since. Including the New York Times bestselling Dragon's Fire, he has written eight books in the Pern universe both solo and in collaboration with his mother, Anne McCaffrey; appeared in many anthologies, most recently with his short story, "Coward," in When the Hero Comes Home (2011), and with "Robin Redbreast" in the forthcoming When the Villain Returns (August 2012), and the mini-anthology Six.

He is currently working on several non-Pern books, including the near future City of Angels and an alternate history steam world where Bonnie Prince Charlie captures London and restores the Stuarts to the thrones of England and Scotland.