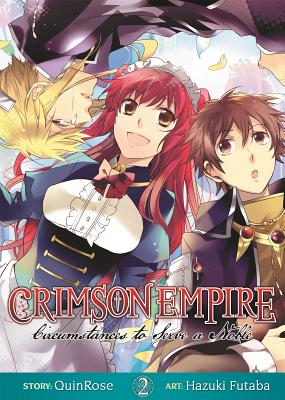 Circumstances to Serve a Noble

From the time she was sold into servitude as a young girl and told by a handsome demonic figure that she had a destiny to fulfill, Sheila's childhood was anything but easy. After joining an assassins' guild to undergo rigorous training, Sheila is later taken in by the dashing Prince Edvard to serve as both his housemaid and bodyguard.


Praise For Crimson Empire, Volume 2: Circumstances to Serve a Noble…

Praise for Alice in the Country of Hearts:

"It may be impossible to beat Lewis Carroll at his own game, but as Alice in the Country of Hearts shows, there are still ways to succeed." —ANIME NEWS NETWORK

QuinRose is a Japanese game developer who created the Alice franchise of video games, which spun off into novels, manga, and an anime feature film.Hazuki Futaba is a Japanese manga artist and light novel illustrator best known for his work on Crimson Empire: Circumstances to Serve a Noble
Loading...
or
Not Currently Available for Direct Purchase