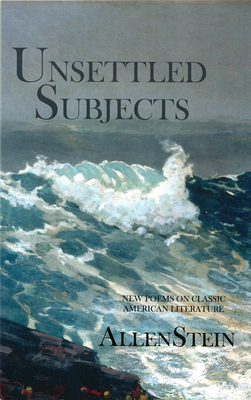 Poetry. If you paid attention during your high school and college American lit classes, and especially if you actually read the books that you were assigned (and found out you liked them ), then chances are you sometimes wondered what happened to your favorite characters after the book ended, or how the story might have looked from the perspective of other characters. Allen Stein has done more than wonder. Drawing on half a century's professional immersion in the classics of American literature, he has written poems that explore, expand, invert, and interrogate the works and lives of some of our best known authors, from Hawthorne, Melville, and Twain, through Whitman, Chopin, and Wharton among many others. We encounter Hester Prynne, who after too long settlement in England and despite the domesticity of her now-grown daughter and Pearl's cheery English husband, / her doughty grandson's rosy English cheek, longs to step ashore at her only true home, / take up her letter and her name, / ...telling women of wondrous voyages / awaiting them... We are present at Poe's end, and at Bartelby's. We accompany Henry James on a stroll through New York's immigrant Lower East Side. There is a grim account of Twain attending his own father's autopsy, and also a hilarious parody of academic pretension in the style of Whitman.

Most powerfully and poignantly, Stein envisions James Watson, Former Slave at the funeral of Huck Finn, reflecting on how in order to gain his freedom, he had played the darky for him, trotted out the hairball and the horse-ass hocus pocus, apologizing to his dead comrade for pretending to be less than I was / and playing him like I did. We learn that Jim went on to be a supply sergeant in Abe Lincoln's army, married with a shop selling clothes in Chicago, still mad about so much, / and always will be, but recognizing that the best moments of a bad time / were those I shared with him on the raft, / when, both of us on the run, / we watched the sun ease its way / soft through the mists over the river. Through this compelling reinvention of one of the most vexing and controversial characters in American literature, Stein (ever the educator) instructs us that we must not merely venerate and perpetuate the literary canon, but must challenge it--as with our troubled national history--in order to arrive at a similar place of harmony. These are, he tells us, unsettled subjects, with much work remaining to be done. This is a book for readers who love books, a form of poetic fan fiction for those who do not want the story to end, no matter where it may take us.