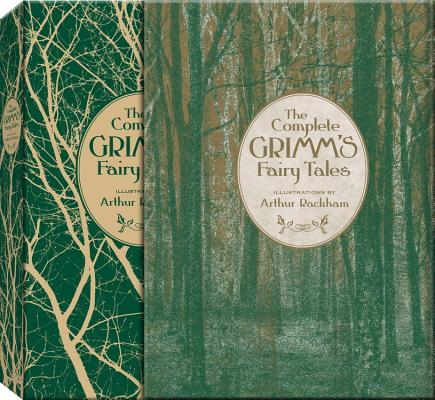 Originally titled Children’s and Household Tales, The Complete Grimm’s Fairy Tales contains the essential bedtime stories for children worldwide for the better part of two centuries. The Brothers Grimm, Jacob and Wilhelm, were German linguists and cultural researchers who gathered legendary folklore and aimed to collect the stories exactly as they heard them. 2012 marked the 200th anniversary of Grimm’s Fairy Tales, and what better way to celebrate than to include all 211 stories into the Knickerbocker Classic Series?
Featuring all your favorite classics, including “Hansel and Gretel,” “Cinderella,” “The Frog Prince,” “Rapunzel,” “Snow White,” “Rumpelstiltskin,” and dozens more, The Complete Grimm’s Fairy Tales is also accompanied by 40 color plates and 60 black and white illustrations from award-winning English illustrator Arthur Rackham, whose books and prints are now highly sought-after collectibles.
The third title in the Knickerbocker Classic series has 800 pages of classic fairy tales to enjoy and will also feature a full-cloth binding, ribbon marker, and will fit neatly in an elegant slipcase for your personal library collection.

The Brothers Grimm, Jacob (1785-1863) and Wilhelm (1786-1859), who today are among the most popular and best-known storytellers of folk tales, were German linguists and cultural researchers who gathered and published their influential collections of legendary folklore during the 19th century.