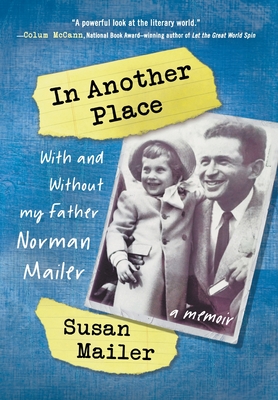 With and Without My Father, Norman Mailer

Norman Mailer, Susan Mailer's father, was among the most celebrated, talented, and controversial writers of the 20th Century. The Naked and the Dead (1948), inspired by his experience in World War II, was a bestseller and made him famous at the age of 25. Notoriously combative and egotistical, her father enjoyed a good ﬁght both physically and verbally. Whether cheered or booed, Mailer was front and center in America's cultural battles for more than 50 years. He married six times and was father to nine children. Susan, born in 1949, is the eldest.

Susan's parents separated when she was a baby. She grew up shuttling between her mother's home in Mexico and New York. Later she would marry a Chilean activist, spending the majority of her adult life in Chile, where she is a practicing psychoanalyst.

In Another Place tells the story of her intense and complex relationship with her father, her ﬁve stepmothers and nine siblings, and the joys and pains of being part of the large Mailer clan. It is a tale of separation, and of the rewards and struggles of living in two very diﬀerent cultures. Of being someone who belongs everywhere and nowhere, always longing for a life . . . In Another Place.