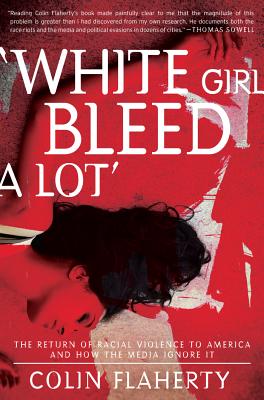 Ferguson might be the worst, but it is not the first.  Ferguson is just the latest of hundreds of examples of black mob violence around the country.

White Girl Bleed a Lot: The Return of Racial Violence and How the Media Ignore It was written for the deniers: Reporters and public officials and others who deny black mob violence has reached epidemic levels.

That is why so many readers get another copy: They send it to someone who needs to read it.

Denial is not an option any more. Many of these cases are now on YouTube.

And for the first time, readers will be able to scan QR codes to follow the black mob violence on video as they read about it in the book.

For the first time, readers will be able to see the huge difference between what big city newspapers say is happening. And what the videos show is really happening.

White Girl Bleed a Lot documents more than five hundred cases of black mob violence in more than one hundred cities around the country. Many in 2013. And how the local and national media ignore, excuse and even condone it.

Or how a Chicago Police Chief blamed the violence on Sarah Palin and the Pilgrims. Or how Oprah Winfrey gave $1 million to a Philadelphia charter school, only to see its students on video assaulting a white person shortly thereafter.

Or how gays and Asians and women are particular targets.

And how one congressman and former mayor said his city should not crack down on the violence because that will "just make a lot of black kids angry."

And how newspaper editors and reporters say they will not report racial violence. And how some people fight back.

Colin Flaherty has won more than fifty awards for journalism, many from the Society of Professional Journalists. His story about a black man unjustly convicted of trying to kill his wife girl friend resulted in his release from state prison and was featured on NPR, the Los Angeles Times and Court TV.


Praise For 'White Girl Bleed A Lot': The Return of Racial Violence to America and How the Media Ignore It…

"ColinFlaherty has become Public Enemy No.1 to the leftist media because of the research he's done on the black culture of violence." — Neal Boortz

"Brilliant. I could not put it down." — Alex Jones, infowars.com

"Great Book." — Anthony Cumia, of the Opie and Anthony Show

"Reading Colin Flaherty's book made painfully clear to me that the magnitude of this problem is greater than I had discovered from my own research. He documents both the race riots and the media and political evasions in dozens of cities." — Thomas Sowell, National Review

Colin Flaherty is an award winning writer whose work has been published in more than 1000 places around the globe, including the New York Times, Los Angeles Times, Boston Globe, Miami Herald, Washington Post, Bloomberg Business Week, Time magazine, and others. He is the author of White Girl Bleed a Lot: The Return of Racial Violence and How the Media Ignore It. As a reporter, he won more than 40 journalism awards, including Best Investigative from the Society of Professional Journalists in
Loading...
or
Not Currently Available for Direct Purchase