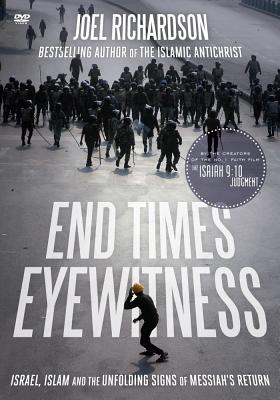 Israel, Islam and the Unfolding Signs of the Messiah’s Return

Is the return of Jesus closer than you think? What are the most powerful prophetic signs being fulfilled in the earth today? How is the new Middle East after the Arab Spring aligning with the testimony of the biblical prophets? What are the little known prophetic signs that few are paying attention to?

End Times Eyewitness takes you on a firsthand journey into the heart of the biblical world, to the front lines of the ongoing Middle Eastern revolutions, to discover the shocking answer to all of these questions. Filmed in several nations and featuring the testimonies of global Christian leaders, pastors, theologians, and missionaries, End Times Eyewitness reveals which biblical prophecies of the last days are being fulfilled in the earth today and what is coming next?

Filmed in the Middle East in the midsts of uprisings and revolutionary fervor, End Times Eyewitness, produced by WND Films with Joel Richardson, goes farther and deeper into the heart of the conflict than what network news teams dare to venture. The access provided was unprecedented. The footage captured is remarkable. The biblical insights from scholars, reporters, Rabbis, and Christian leaders are startling.

Joel Richardson is the author of several books including The New York Times bestselling Islamic Antichrist: The Shocking Truth About the Real Nature of the Beast. He is an internationally recognized expert on Biblical prophecy, the Middle East, and Islam, and is a human rights activist and a commentator for WND. Joseph Farah is best known as the founder of the first independent online news service, WorldNetDaily.com, now known as WND.com, more than 20 years ago. Previously he had served as editor-in-chief of major market dailies, investigative reporter and foreign correspondent. He is the author of more than a dozen books including his most recent in 2017, The Restitution of All Things: Israel, Christians and the End of the Age. George Escobar is Vice President of WND Films and TV in charge of programming, production and strategy. Escobar directed THE ISAIAH 9:10 JUDGMENT for WND Films, which was Amazon's No. 1 bestselling Faith DVD in 2012 and 2013. He is co-founder of Advent Film Group, whose inaugural movie, COME WHAT MAY, was seen by over 3.5 million people online and on TV. Advent's new films for 2014 include HERO, THE SCREENWRITERS, and ALONE YET NOT ALONE produced for Enthuse Entertainment.