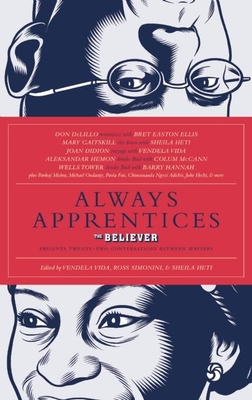 Always Apprentices collects five years of intimate, wide-ranging conversations with many of today's most prominent writers, taken from the pages of the Believer. The participants don't limit themselves to issues of writing and craft, but instead offer unfettered exchanges on a wide range of topics--from what it means to be a consumer to whether or not to kill a deer, from how we get to know each other to walking while inebriated. The interviews feature the serious-yet-casual Believer approach to the often staid interview format. For example, Sheila Heti asks Mary Gaitskill, "If you go into a room or go to a party, is there a basic disposition you have toward humans going through the world?" Elsewhere, Colum McCann begins his conversation with Aleksandar Hemon by asking, "What are we doing here? Why aren't we in a pub?" Other interviews include Don DeLillo talking with Bret Easton Ellis; Joan Didion talking with Vendela Vida; and Barry Hannah talking with Wells Tower.

Sheila Heti is the author of five books, including the "novel from life" How Should a Person Be? and The Chairs Are Where the People Go, co-authored with Misha Glouberman, which the New Yorker called "a triumph of conversational philosophy." She lives in Toronto. Ross Simonini is a musician, writer, and artist living in New York. He has edited interviews at the Believer since 2007. Vendela Vida co-founded the Believer in 2003. She is the author of four books, including the novels Let the Northern Lights Erase Your Name and The Lovers.
or
Buy Here
Copyright © 2020 American Booksellers Association