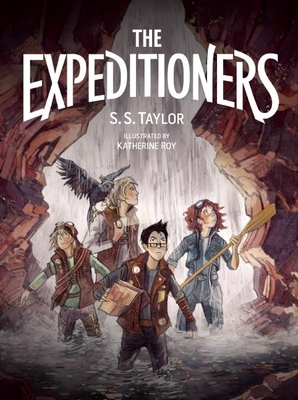 The Expeditioners and the Treasure of Drowned Man's Canyon

“Make way for the Wests -- Zander, Kit and MK -- three orphans living in the near future, where computers and electricity have failed. They are determined to discover what happened to their father, the famous cartographer Alexander West, on his last expedition but must lay low so that evil government officials don?t learn that they no longer have adult supervision. The plot thickens when a mysterious stranger finds Kit in a market and hands him half a map, which the kids immediately recognize as one of their father's. The children interpret this as a sign to find the other half and set off to discover why this map is so important. An exciting start to a new series.”
— Lisa Christie, Norwich Bookstore, Norwich, VT
View the List

Computers have failed, electricity is extinct, and the race to discover new lands is underway! In this nail-bitingly thrilling adventure novel, brilliant explorer Alexander West has just died under mysterious circumstances, but not before smuggling half of a strange map to his intrepid children Kit, the brain, M. K., the tinkerer, and Zander, the brave. Why are so many government agents trying to steal the half-map? What powerful secrets does it hold? And where is the other half? It's up to Alexander's children the Expeditioners to get to the bottom of these questions, and fast.


Praise For The Expeditioners and the Treasure of Drowned Man's Canyon…

"Full of kid power, clues, codes and maps, this will appeal to sophisticated readers who appreciate their adventure served with heaping helpings of cleverness."
Kirkus

Beautifully written and nail-bitingly thrilling, this is an easy series to get hooked on.” San Francisco Chronicle

"Sarah Stewart Taylor has a penchant for adventure that has led her to pen books with a wide-ranging sense of place and appeal." Rutland Herald

"The story moves at a thrilling pace, and the adventure will capture the imagination of readers. Roy's illustrations add another terrific element to the story; the jacket, endpapers, and cover of the hardcover book are stunning. I hope this title marks the first in a series, as I can see many readers developing a fondness for the characters and a desire to see their adventures progress." Show Me Librarian

"Beautifully written. S.S. Taylor writes a book for kids that sophisticated adult readers will love, too. Be prepared to do some heavy negotiating for your household’s copy!" Betty Confidential

"The Expeditioners will surely intrigue you." The Daily Pretzel

"'The Expeditioners' is an exciting ride from beginning to end." Cracking the Cover

"The Expeditioners rollicks, twists, turns and chases through canyons and arroyos, along airships and gliders, through boxcars and crumbling mansions, and on the way the heroes uncover all sorts of fabulous mysteries through their own cunning and bravery. It is a thoroughly smashing read."Boing Boing


"Full of kid power, clues, codes, and maps, this will appeal to sophisticated readers who appreciate their adventure served with heaping helpings of cleverness." — Kirkus Reviews

S. S. Taylor lives in Vermont and has a strong interest in books of all kinds, expeditions, old libraries, mysterious situations, long-hidden secrets, maps, and exploring known and unknown places. She is most recently the author of Amelia Earhart: This Broad Ocean. Katherine Roy lives in New York City.
Loading...
or
Not Currently Available for Direct Purchase