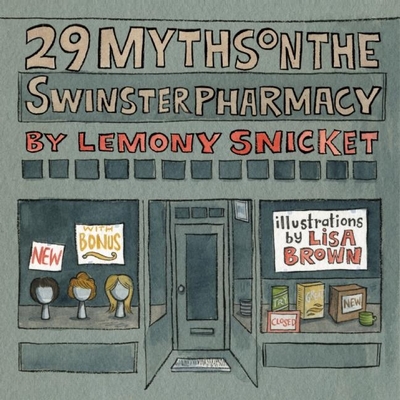 29 Myths on the Swinster Pharmacy

We are very curious about the Swinster Pharmacy. We stay up late every night wondering what sort of eerie secrets it contains. Why are there three Styrofoam heads in the windows? Who is the owner? Is it really closed on weekends? Renowned investigator Lemony Snicket has compiled 29 myths about this bewildering establishment, in the vain hope that he could help us shine some light on this enduring mystery.

Praise For 29 Myths on the Swinster Pharmacy…

"[29 Myths on the Swinster Pharmacy] provides a clear reason for drawing one’s own conclusions: Observing and recording the results through a personal filter makes a good story." Kirkus Reviews

"Beneath [29 Myths on the Swinster Pharmacy] is a lovely allegory about the capacity of children’s imaginations to see enigmatic wonder in even the simplest things and find multiple meanings in the most mundane." Maria Popova, BrainPickings

Lemony Snicket frequently stays up late, worrying about some of his books, including When Did You See Her Last? and The Latke Who Couldn't Stop Screaming, which was also illustrated by Lisa Brown. Lisa Brown has been known to stay up even later than Lemony Snicket, which is why she is associated with such books as Vampire Boy's Good Night, Picture The Dead, and other books that leave dark circles around her eyes.
Loading...
or
Not Currently Available for Direct Purchase