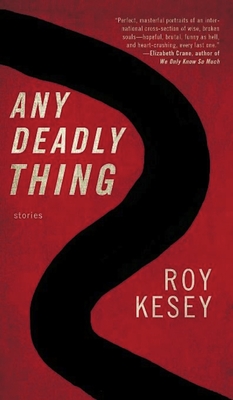 Following the critical success of his debut collection, All Over, and of his debut novel, Pacazo, Roy Kesey now brings us a new gathering of short stories, Any Deadly Thing. These stories first appeared in magazines including McSweeney's, Subtropics, Ninth Letter and American Short Fiction, and have been widely anthologized; among them are winners of a Pushcart Prize special mention, an Honorable Mention in The Year's Best Fantasy and Horror, and The Missouri Review's Jeffrey E. Smith Editors' Prize in Fiction. With story locales ranging across the Americas to Europe and Asia, Kesey once again makes the full strange world his stage.

Perfect, masterful portraits of an international cross-section of wise, broken souls--hopeful, brutal, funny as hell, and heart-crushing, every last one. --Elizabeth Crane, author of We Only Know So Much

Roy Kesey is one of my favorite contemporary writers, and Any Deadly Thing is another triumph. These stories, reminiscent of William Gass in the remarkable way they combine a virtuoso playfulness and wit with an atmosphere of grimness and grief and heartbreak, range the world over for their brilliantly realized locales, but they share a deeper setting in what Gass calls 'the only holiness we have, ' human consciousness. Kesey demonstrates once again that he is a spectacularly deft and empathetic priest of that creed, which is the only one for me. --Michael Griffith, author of Trophy

With his engaging narrative voice and well-paced prose, Kesey dramatizes moments of extremity through characters who struggle to reconcile their burden of guilt and the impulse to do something that helps. (...) This pattern of revelation during debasement is part of the glorious nature of Kesey's misfits in misery in Any Deadly Thing. Wrong about so much in their lives, their moments of clarity, companionship, and agency stand out all the brighter amid the dirt and doubt. --Jason Marc Harris, Mid-American Review

"Most short-story writers are like baseball pitchers. The really good ones have four or five different pitches, but most only have two or three that they've perfected and go to over and over again. Kesey is more like a five-tool outfielder: He can do it all. In Any Deadly Thing, he collects stories about lovable losers, tales of hardscrabble redemption, experimental fiction, Bosnian war stories and expat tales set in Beijing apartments and Peruvian jungles. There's no limit to the man's imagination." --Jim Ruland, San Diego City Beat

"Every one of the characters is someone the reader can latch on to. Their choices are terrible, but they make sense. It's not something you would do (you hope), but it's something you can't look away from, like the tastiest, pathos-iest train wreck you've ever seen." --Mike Tager, Jmww Journal

"Kesey's writing is elegant and detailed in Any Deadly Thing, anchoring story lines that are at times surreal. (...) He knows the mood he's setting, knows how to guide the reader through these stories and knows just when to step away when they are over." --Steve Newman, Time Out Chicago

Roy Kesey's latest book is a short story collection called Any Deadly Thing, published by Dzanc Books in February 2013. His other books include a novel called Pacazo (the January 2011 selection for The Rumpus Book Club, and winner of the Paula Anderson Book Award), a collection of short stories called All Over (a finalist for the Foreword Magazine Book of the Year Award, and one of The L Magazine's Best Books of the Decade), a novella called Nothing in the World (winner of the Bullfight Media Little Book Award), and two historical guidebooks. His short stories, essays, translations and poems have appeared in more than a hundred magazines and anthologies, including Best American Short Stories, The Robert Olen Butler Prize Anthology and New Sudden Fiction. He has won two Pushcart Prize Special Mentions, the Jeffrey E. Smith Editors' Prize in Fiction, and a 2010 prose fellowship from the NEA. He currently lives in Maryland with his wife and children.
Loading...
or support indie stores by buying on