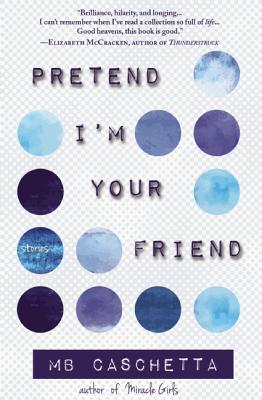 A sister's darkest secret is revealed at her brother's wedding. A woman with extrasensory visions accidentally gives her philandering husband her blessing. A dying mother wishes her cancer was her daughters', not hers. Pretend I'm Your Friend lays bare the fear, loss, and pain of love, sex, and family life in eleven crisp, engaging, and startlingly funny, elegantly entwined stories.

MB Caschetta is an award-winning novelist and short story writer. Her novel Miracle Girls won the USA Best Book Award for Literary Fiction, an Independent Publisher Awards Gold Medal in Spiritual Books, and was an LGBT IndieFAB 2015 Book of the Year. Miracle Girls was also a Lambda Literary Award Finalist and a People Pick-of-the-Week, where it was hailed as "darkly beautiful." Caschetta lives in Massachusetts with her spouse and standard poodle.

MB Caschetta is an award-winning novelist and short story writer. Her novel Miracle Girls (Engine Books, 2014) won The 2015 USA Best Book Award for Literary Fiction, a Gold Medal in Spiritual Books from the Independent Publisher Awards (IPPYs), and an IndieFAB 2015 Book of the Year in the LGBT category. Miracle Girls was also a Lambda Literary Award Finalist and a People Magazine Pick-of-the-Week, where it was hailed as "darkly beautiful." She is the recipient of the W.K. Rose Fellowship and the Sherwood Anderson Foundation Fiction Award. Ms. Magazine called her first book of stories Lucy on the West Coast (Alyson Books) "a spectacular collection." Her non-fiction has appeared in the New York Times, The Chronicle of Higher Education, and The Journal of Creative Non-Fiction, as well as in anthologies by The Feminist Press, The Other Press, St. Martin's, and Plume, among others. Stories from Pretend I'm Your Friend have appeared in The Mississippi Review, The Red Rock Review, Thieves Jargon, Ecclectica, 3: AM Magazine, and Bloom, among other literary journals. Select stories have also been awarded The Seattle Fiction Review Prize (winner), The Mississippi Review Fiction Prize (runner-up), and The Iowa Review Fiction Prize (finalist). MB lives in Massachusetts with her spouse and standard poodle and is currently working on a book about being disinherited.
or
Not Currently Available for Direct Purchase
Copyright © 2020 American Booksellers Association