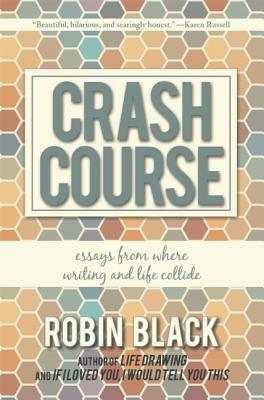 Essays from Where Writing and Life Collide

Robin Black's path through loss and survival delivered her to the writer's life. Agoraphobia, the challenges of parenting a child with special needs, and the legacy of a formidable father all shaped that journey. In these deeply personal and instructive essays, the author of the internationally acclaimed If I loved you, I would tell you this and Life Drawing explores the making of art through the experiences of building a life. Engaging, challenging, and moving, Crash Course is full of insight into how to write--and why.

I sense, even now, the reverberations of a kind of shattering of my foundation and a quick rebuild, a change at a molecular level of who I understood myself to be. No longer someone who could look at another person without wondering what their life was like, but someone with a new curiosity about what people's stories might actually be.

Robin Black is the author of the story collection, If I loved you, I would tell you this and the novel Life Drawing, both critically acclaimed, and both published in multiple languages. She has developed a loyal, enthusiastic following for her essays on life and writing, online and in such publications as the New York Times, the Chicago Tribune, and O Magazine. She lives with her husband in Philadelphia, Pennsylvania, where the house is always open for their three grown children.

Robin Black's story collection If I loved you, I would tell you this, was published by Random House in 2010 to international acclaim, and was followed by her debut novel, Life Drawing in 2014. Robin's stories and essays have appeared in numerous publications including The Southern Review, The New York Times Magazine, One Story, The Georgia Review, Colorado Review, Alaska Quarterly Review, Freight Stories, Indiana Review, and The Best Creative Nonfiction, Vol. I (Norton, 2007). She is the recipient of grants from the Leeway Foundation, the MacDowell Colony, the Sirenland Conference and is also the winner of the 2005 Pirate's Alley Faulkner-Wisdom Writing Competition in the short story category. Her work has been noticed four times for Special Mention by the Pushcart Prizes and also deemed Notable in The Best American Essays, 2008, The Best Nonrequired Reading, 2009 and Best American Short Stories, 2010. She holds degrees from Sarah Lawrence College and the Warren Wilson MFA Program for Writers.
Loading...
or support indie stores by buying on