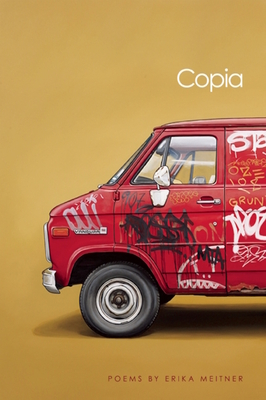 Erika Meitner's fourth book grapples with the widespread implications of commercialism and over-consumption, particularly in exurban America. Documentary poems originally commissioned by Virginia Quarterly Review examine the now-bankrupt city of Detroit, once the thriving heart of the American Dream. Meitner probes the hulking ruins of office buildings, tract housing, superstores, construction sites, and freeways--exposing a vacuous world of decay and abandonment--while holding out hope for re-birth from ashes. Because it is an uninhabited place, because it
makes me hollow, I pried open the pages of
Detroit: the houses blanked out, factories
absorbed back into ghetto palms and scrub-
oak, piles of tires, heaps of cement block.
Vines knock and enter through shattered
drop-ceilings, glassless windows. Ragwort
cracks the street's asphalt to unsolvable
puzzles.

Erika Meitner was a 2009 National Poetry Series winner. Her work has appeared in American Poetry Review, Ploughshares, Tin House, The Best American Poetry 2011, Kenyon Review, and elsewhere. She is associate professor of English at Virginia Tech.

Erika Meitner's first collection of poems, Inventory at the All-night Drugstore, won the 2002 Anhinga-Robert Dana Prize for Poetry from Anhinga Press. Her second collection, Ideal Cities, was a winner of the 2009 National Poetry Series and was published by Harper Collins in 2010. Her next book, Makeshift Instructions for Vigilant Girls, was published by Anhinga Press in 2011. She is a graduate of Dartmouth College and the MFA program at the University of Virginia, where she was a Henry Hoyns Fellow, and also earned an M.A. in Religion as a Morgenstern Fellow in Jewish Studies. Her work has appeared in American Poetry Review, The Best American Poetry 2011, Gulf Coast, Ploughshares, Best African American Essays 2010, Tin House, and Prairie Schooner, among other journals and anthologies. She is currently an associate professor of English at Virginia Tech, where she teaches in the MFA program.
Loading...
or support indie stores by buying on