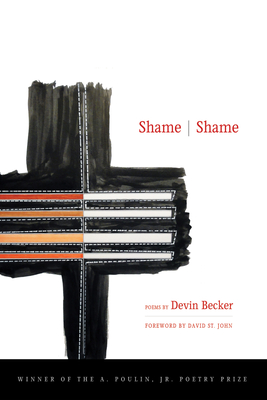 Devin Becker's Shame Shame is a brilliant debut collection. Here, the prose poem has been re-imagined as a cinematic vignette, yet rooted as deeply in the American Northwest as anything in Richard Hugo and David Lynch. Raw, intimate, and elliptical in its metaphysics, Devin Becker's poetry captures an idiomatic recklessness while navigating those angular narratives of our contemporary lives. --David St. John Devin Becker grew up in Fort Wayne, Indiana, and lives in Moscow, Idaho, where he works as digital initiatives librarian at the University of Idaho Library. He was named a 2014 Mover and Shaker by Library Journal.

Devin Becker: Devin Becker grew up in Fort Wayne, Indiana, and holds degrees from Williams College, the University of California, Irvine, and Indiana University. His poetry and research articles have been published in American Archivist, Cutbank, Faultline, Microform and Digitization Review, Midwestern Gothic, The Pinch, Prairie Schooner, and elsewhere. He currently lives in Moscow, Idaho, where he works as the digital initiatives librarian at the University of Idaho Library. David St. John: Over the course of his career, David St. John has been honored with many of the most significant awards for poets, including fellowships from The National Endowment for the Arts, The John Simon Guggenheim Memorial Foundation, The Rome Fellowship, an Award in Literature from The American Academy and Institute of Arts and Letters, the O. B. Hardison Prize (a career award for teaching and poetic achievement) from The Folger Shakespeare Library, the George Drury Smith Lifetime Achievement Award, and a grant from the Ingram Merrill Foundation. His work has been published in countless literary magazines, including The New Yorker, The Paris Review, Poetry, American Poetry Review, Harper's, Antaeus, and The New Republic, and has been widely anthologized. David St. John is the author of ten collections of poetry, as well as a volume of essays, interviews and reviews, and is co-editor of American Hybrid: A Norton Anthology of the New Poem. He currently teaches at the University of Southern California in Los Angeles.
Loading...
or support indie stores by buying on