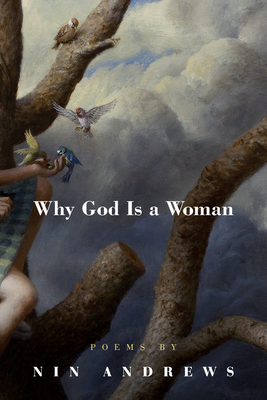 Why God Is a Woman (Paperback)

Why God Is a Woman is a collection of poems written about a magical island where women rule and men are the second sex. It is also the story of a boy who, exiled from the island because he could not abide by its sexist laws, looks back with both nostalgia and bitterness and wonders: Why does God have to be a woman? Celebrated prose poet Nin Andrews creates a world both fantastic and familiar where all the myths, logic, and institutions support the dominance of women.

Nin Andrews's books include The Book of Orgasms and Sleeping with Houdini.

Nin Andrews: Nin Andrews grew up on a farm in Charlottesville, Virginia. She received her BA from Hamilton College, and her MFA from Vermont College. She is the author of numerous books, including Spontaneous Breasts, winner of the Pearl Chapbook Contest; Any Kind of Excuse, winner of the Kent State University chapbook contest; The Book of Orgasms; and the BOA title Sleeping with Houdini, named one of ten best poetry books of 2010 by the Monserrat Review. Her poems and stories appear widely in such places as Ploughshares, The Paris Review, Best American Poetry, Great American Prose Poems, and elsewhere. Married to Jim Andrews, a physicist and a university professor at Youngstown State University, she lives and writes in Poland, Ohio.
or
Not Currently Available for Direct Purchase
Copyright © 2020 American Booksellers Association