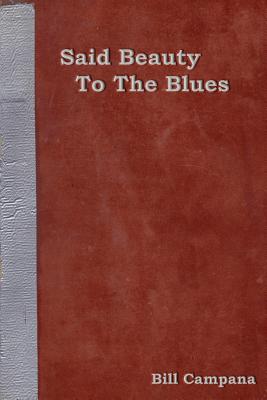 Said Beauty to the Blues

A poetry tour de force, Bill Campana has done what few poets could ever dream of in writing sharp, entertaining poetry that doesn't cater to anyone but is enjoyed by all. A veteran of the 1990's poetry slam movement, Said Beauty to the Blues proves Bill is a writer of many styles and ideas. In his live performances, he comes at you like a machine gun of short, powerful linguistic observations. Having this book gives you the opportunity to give each piece it's due. Bill's live performances are the thing of legend, if you get to see him, you might get lucky enough to hear one of these.

bill campana has been writing poetry for public consumption since 1997. a longstanding contributor and frequent guest host of the fabled mesa slam at the essenza coffee house in mesa, arizona, two-year host of the now defunct sound effects poetry open mic in phoenix, and current host of the open mic portion of the caffeine corridor poetry series also in phoenix. bill has read and featured in too many venues to mention. without a doubt he has logged more mic time than any other poet in arizona from 1997 through the present.
Loading...
or support indie stores by buying on