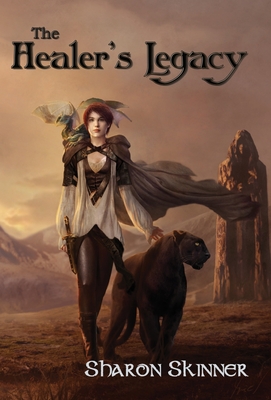 Orphaned by war, haunted by unknown origins, and chased by a warlord and his army of brutal soldiers, KIRA is a young woman with a secret. She can psychically communicate with animals. She is also on the run from her abusive mate Toril, the hero turned warlord, who led the country's forces to victory against the outland raiders.

Only that was before his love of power consumed him. Now, his only focus is on tracking down Kira and making her punishment an example of his power.

The quest for freedom isn't the only struggle Kira faces. She must also come to terms with her past choices, whose echoes drive her present. Now, the future of the land and people she has come to love depends on the decisions she will be forced to make.

Author Sharon Skinner takes us on an extraordinary and emotional journey, where survival is about more than life and death, and healing takes more than medicine. The Healer's Legacy is an unforgettable story and a captivating reading experience.

"Who doesn't want a pet dragon, especially one that is sized just right?. . . Sure to become a classic fantasy tale, the author brings this story to vivid life." - Cathy A.
"I really enjoyed reading this book with a very strong female leading character, who is as complex as she is brave, and a plot that only deepens as the book goes on. One fantastic read " - Birbitt
"Nice balance between the intelligence, kindness, and gentle characteristics of a healer with the pragmatic, courageous characteristics of a warrior. Would really enjoy a sequel."- Barbara Roberts

Too soon, she heard the change in the cries of the men. Their yells, no longer those of encouragement, became bellowed curses. Kira peered ahead, straining to catch sight of the main road. Trad's hooves beat a loud tattoo against the hard dirt, but she could hear the noise of pursuit rising in the distance.

The sound of the pursuing horses grew to a low thunder as she and Trad burst onto the main road. She leaned low over Trad's neck as the big horse veered right and lengthened his stride. The shouting of the men grew louder. Their curses carried through the woods, echoing between the trees.

Kira urged Trad to quicken his pace. They had to put more distance between them and Toril's men. At the sound of hooves behind her, she glanced back. Through the deepening shadows she saw movement. One of the men charged onto the main road, his horse a dark shadow moving beneath him. An arrow whizzed past, low and to the left. She sucked in her breath and hunched down in the saddle, squeezing tightly with her knees as Trad's speed increased.

"I tend to come at difficult subject matter from a subtle direction, using fiction to delve into things that are often difficult to discuss rationally. In addition to the challenges of their often-heroic journeys, my characters deal with real-world issues like difficult relationships, dark secrets, prejudice, death, domestic abuse, questioning authority, and self-acceptance. I purposely avoid being preachy or didactic and I like to salt a bit of humor and mischievous fun into the mix."