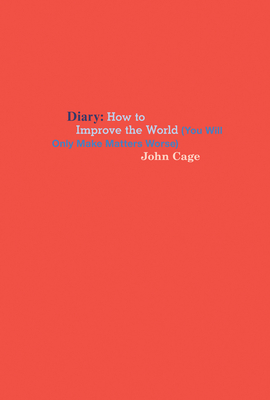 Diary: How to Improve the World (You Will Only Make Matters Worse)

Composed over the course of 16 years, John Cage's Diary: How to Improve the World (You Will Only Make Matters Worse) is one of his most prescient and personal works. A repository of observations, anecdotes, obsessions, jokes and koan like stories, the diary registers Cage's assessment of the times in which he lived as well as his often uncanny predictions about the world we live in now. With a great sense of play as well as purpose, Cage traverses vast territory, from postwar music to Watergate, from domestic minutiae to ideas on how to feed the world.
Typing on an IBM Selectric, Cage used chance operations to determine not only the word count and the application of various typefaces but also the number of letters per line, the patterns of indentation and--in the case of Part Three (published as a Great Bear pamphlet by Something Else Press)--color. The beautiful and unusual visual variances become almost musical as the physicality of the language on the page suggests the sonic. This first complete hardcover edition collects all eight parts Cage originally published in A Year from Monday, M and X. Coeditors Kraft and Biel have consulted these publications along with Cage's original manuscripts, and--with the Great Bear pamphlet as a guide--they have used chance operations to render the entire text in various combinations of red and blue as well as apply a set of 18 typefaces to the entire work.
Composer, philosopher, writer and artist, John Cage (1912-92) is one of the most influential figures of the 20th century. A pioneer in extending the boundaries of music, often composing works through chance operations, Cage also had an extraordinary impact on dance, poetry, performance and visual art.