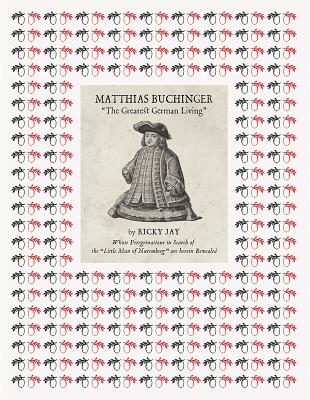 "The Greatest German Living": By Ricky Jay Whose Peregrinations in Search of the "Little Man of Nuremberg" Are Herein Revealed

Matthias Buchinger (1674-1739) performed on more than a half-dozen musical instruments, some of his own invention. He exhibited trick shots with pistols, swords and bowling. He danced the hornpipe and deceived audiences with his skill in magic. He was a remarkable calligrapher specializing in micrography--handsome, precise letters almost impossible to view with the naked eye--and he drew portraits, coats of arms, landscapes and family trees, many commissioned by royalty. Amazingly, Buchinger was just 29 inches tall, and born without legs or arms. He lived to the ripe old age of 65, survived three wives, wed a fourth and fathered 14 children. Accompanying the Metropolitan Museum of Art exhibition Wordplay: Matthias Buchinger's Inventive Drawings from the Collection of Ricky Jay, the book is a cabinet containing a single, multifaceted wonder, refracted through author Ricky Jay's scholarship and storytelling. Alongside an unprecedented and sumptuously reproduced selection of Buchinger's marvelous drawings and etchings, Jay delves into the history and mythology of the "Little Man," while also chronicling his encounters with the many fascinating characters whom he meets in his passionate search for Buchinger.
Ricky Jay is considered one of the world's great sleight-of-hand artists. His career is further distinguished by his accomplishments as author, actor and historian of "unusual entertainments." He has appeared in films directed by Paul Thomas Anderson, Gus Van Sant and David Mamet. His Jay's Journal of Anomalies and Learned Pigs & Fireproof Women were New York Times "Notable Books." The subject of the documentary Ricky Jay: Deceptive Practices, Jay is the only conjurer to be profiled in the PBS series American Masters.