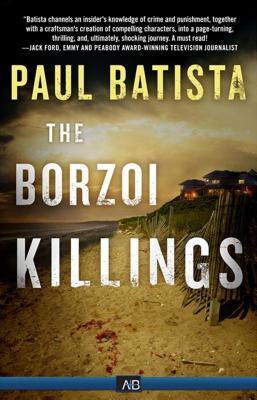 When the tenth richest man in the world is brutally murdered along with his prized Borzoi dogs in a luxurious East Hampton beach house, only one man is suspected of committing the crime: Juan Suarez, a handsome, charismatic--and illegal--Mexican immigrant who worked for the victim. Now, renowned trial lawyer Raquel Rematti must defend the man the media has dubbed, "The Blade of the Hamptons." Not only must she take on one of the wealthiest families in the country, she must protect Suarez and herself from ruthless people bent on lethal revenge, while straddling the dangerous line between concerned involvement and forbidden passion for her client. Set in one of the most exclusive resorts in the world, The Borzoi Killings mixes all the twists of a sensational trial with all the dirty little secrets of the elite Hampton socialite lifestyles--from lavish parties, drugs, and sex, to corruption and dangerous secret cartels.

Paul Batista, novelist and television personality, is one of the most widely known trial lawyers in the country. As a trial attorney, he specializes in federal criminal litigation. As a media figure, he is known for his regular appearances as guest legal commentator on a variety of television shows including, Court TV, CNN, HLN and WNBC. He s also appeared in the HBO movie, You Don't Know Jack, starring Al Pacino. These contacts will be used in promotion. A prolific writer, Batista authored the leading treatise on the primary federal anti-racketeering statute, Civil RICO Practice Manual, which is now in its third edition (Wiley & Sons, 1987; Wolters Kluwer, 2008). He has written articles for The New York Times, The Wall Street Journal, and The National Law Journal. Batista's debut novel, Death's Witness, was awarded a Silver Medal by the Independent Book Publishers Association (IBPA). Batista is a graduate of Bowdoin College, where he was elected to Phi Beta Kappa, and Cornell Law School. He s proud to have served in the United States Army. Paul Batista lives in New York City and Sag Harbor, New York."
Loading...
or
Not Currently Available for Direct Purchase