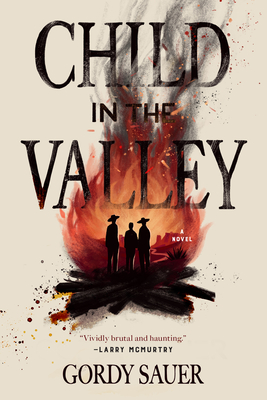 Child in the Valley

Seventeen-year-old Joshua Gaines is the orphaned foster son of a failed doctor on the run from his father's debt. In 1849, he travels to Independence, Missouri and falls in with the mysterious, four-fingered Renard, and his companion, formerly-enslaved Free Ray. Joshua offers his medical expertise to their party, and together they embark on the fifteen-hundred mile overland journey to Gold Rush California.

Following the hardship, disease, and death on the trail, the company abandons panning the river in favor of robbery and murder. Engulfed by violence, the young doctor-turned-marauder must reckon with his own morality, his growing desire for the men around him, and the brutality that has haunted him all his life.

For fans of The Revenantand Ian McGuire's The North Water, Child in the Valley is a gorgeously rendered tale cut from the turmoil of a fledgling America. Gordy Sauer's careful eye and penetrating literary lens offers a modern, incisive look into the complexities of masculinity, isolation, and the impenetrable nature of greed.

Gordy Sauer is a native Texan and transplant Missourian. He holds an MFA from Columbia University and an MA from Clemson University. His writing has appeared in Narrative and Boulevard, among other places, and he received a 2013 artist's grant for residency at the Vermont Studio Center. A lifelong educator, he has taught snowboarding, fly fishing, middle school math and science, and now works as a speechwriter at Mizzou. He lives in Columbia, Missouri.
Loading...
or support indie stores by buying on