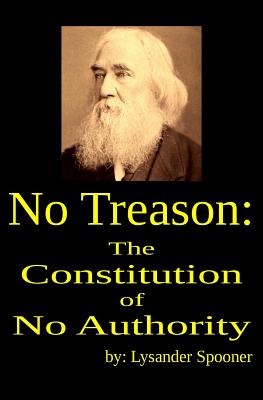 The Constitution of No Authority

"But whether the Constitution really be one thing, or another, this much is certain - that it has either authorized such a government as we have had, or has been powerless to prevent it. In either case, it is unfit to exist." Lysander Spooner.

Lysander Spooner was a 19th century entreprenuer, scholar, radical abolitionist, and principled believer in natural law and liberty. Lysander Spooner came form the flinty farmland of rural New England. He was born January 19, 1808, on his father's farm near Athol, Massachusetts, the second child and second son in a family of six sons and three daughters. Before opening the American Mail Company, he sent a personal letter informing the Postmaster General (January 11, 1844), that he proposed "soon to establish a letter mail [company] from Boston to Baltimore. I shall myself remain in this city, where I shall be ready at any time to answer to any suit..." Accompanying the letter was a copy of Spooner's pamphlet, The Unconstitutionality of the Laws of Congress Prohibiting Private Mails. When his company began business on January 23, Spooner openly advertised in all the major newspapers, soliciting business. The American Letter Mail Company printed its own stamps, hired agents, and was soon conducting a busy trade. Hoping to drive Spooner out of business without raising any constitutional questions, the Postmaster General resorted to some extra-legal measures. Under a barrage of harassing legal actions, the company could not survive; for all practical purposes it had ceased to exist by July 1844. After his post office venture failed, Lysander Spooner returned to the family farm in Athol. Spooner had a clear notion of "the principles of natural equity." Although lacking formal ties before 1870 with other American anarchists, Spooner knew many of them well. The key question for an anarchist is how to combine complete individual freedom with some form of effective social co-operation. Spooner answered that community service and other social action could be realized voluntarily. He argued that "under the principle of individual consent, the little government that mankind need, is not only practicable, but natural and easy..." Spooner died "at one o'clock in the afternoon of Saturday, May 14, 1887... surrounded by trunks and chests bursting with the books, manuscripts, and pamphlets which he had gathered in his active pamphleteer's warfare over half a century long.
or support indie stores by buying on
Copyright © 2020 American Booksellers Association