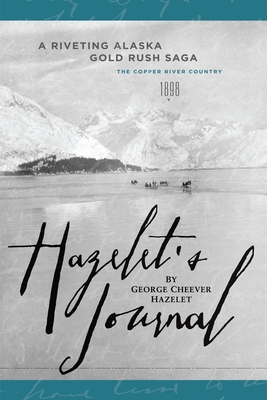 This is no staid diary. There are forest fires, floods, gunplay, and many other death-defying episodes. Reviewer, Mark McLaughlin Hazelet's Journal is a true story that gives us insight into the character of those who went before us, a sense of passion, loyalty, and resilience that was so much a part of the great American spirit that our country was founded upon. It's told in the journalist's original voice, captured for generations to come. George Cheever Hazelet was inspired by the great tycoons at the dawn of the Industrial Age and became one himself in the chicory-coffee market. But then the markets crashed and coffee became as cheap as the dirt the farmers were trying to cultivate. In this calamitous financial crisis of the 1890s, he turned to the one opportunity that played no favorites--the Klondike Gold Rush. Hazelet was one of those adventurous souls who went to Alaska in 1898 to seek his fortune. He carved his own path across frozen tundra and snow-covered glaciers to a valley in Alaska scarcely seen by a white man. Here he found not only gold, but coal and oil and rich shafts of copper, the size of which promised breathtaking fortunes.

It would also be a valley that would become a symbol of hope for some, despair for others, and lost opportunity for powerful men who did not like to lose. This last frontier was known as the Copper River Country, and it was here that Hazelet set his sights on a new beginning in Alaska.

He carried with him the hopes of his family and friends back home in Nebraska as he set out to stake his claim to the gold that seemed to be as plentiful as rain. He remained in Alaska to become one of the most prominent figures of this last frontier.

With his close friend and partner Andrew Jackson Meals, he would figure prominently in the development of both Valdez and Cordova. He would meet the titans of industry and two sitting U.S. Presidents, and he would later become the first mayor of Cordova in 1909.

John Clark received a BA in Fine Arts from the University of New Mexico and successfully built and ran a printing and manufacturing company located in Louisville, Kentucky for 27 years. He is the great grandson of George Cheever and Hattie Potter Hazelet. Today, Clark is the president of The Port Valdez Company, which traces its landholding to George Cheever Hazelet and his partner Andrew Jackson Meals original scripting of 720 acres in Valdez, Alaska. Clark also is the founder of Old Stone Press. He and his wife Gretchen live in Louisville.
Loading...
or
Not Currently Available for Direct Purchase