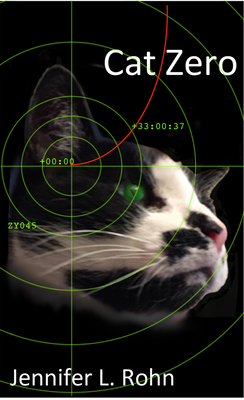 Scientist Artie Marshall is perpetually underfunded, relegated to a damp basement, and besieged on all sides by sexist colleagues. Added to that, she is immersed in a messy divorce. But she’s never been happier, studying an obscure cat virus that nobody else in the world seems to have heard of – or cares about.

Working with her right-hand man Mark, her vet friends and her street-smart technician, Artie races to get to the bottom of the ballooning epidemic. Unexpected assistance arrives in the form of two basement-dwelling mathematicians – a sociopathic recluse and his scary, otherworldly savant mentor. When their mathematical models suggest that the cat plague might actually be more sinister than it first appears, Artie gets drawn into a web of secrets and lies that threatens to blow apart her lab family, undermine her sanity – and endanger her own life.

“Cat Zero is that rare beast, a racy novel with a sound scientific background. Postdocs will love it. Ph.D.s will gasp. And the general reader will enjoy a smart romantic thriller in which an intelligent, independent and, yes, beautiful, researcher confronts her demons while fighting to succeed in a male-dominated world. Will she find love along the way? Read it to find out—I did, and loved it!” — Simon Mawer, author of Man Booker Prize-shortlisted The Glass Room, Trapeze, The Fall and Mendel’s Dwarf

“Absolutely gripping. A fast-paced story that opens the lid on the secret world of the laboratory and shows us what scientists are really like—as human and fallible as the rest of us.” — Pippa Goldschmidt, author of The Falling Sky and The Need for Better Regulation of Outer Space

“A potent mix of science, thrills and romance… Fans of Michael Crichton will love it.” — Mark Edwards, author of number-one bestsellers The Magpies and Because She Loves Me

Jennifer Rohn leads a cell biology research lab at University College London in the United Kingdom, studying how bacteria outwit human cells during infection. In her spare time, she moonlights as a science writer, journalist, broadcaster and pundit. She blogs about the scientific life at Mind The Gap and on the Guardian, and has written for a number of outlets including The Times, The Guardian, Nature, The Telegraph, and the BBC. She also created and continues to run the science culture online magazine LabLit.com, which has been highlighted in the New York Times, US National Public Radio, the Guardian and the Boston Globe. 'Lab lit', a term she coined, is a tiny but growing genre of mainstream fiction about scientists and science as a profession (as opposed to science fiction). She speaks frequently to live audiences, and appears on TV, radio, on podcasts and as an expert in science documentaries. She is the author of two other lab lit novels: Experimental Heart and The Honest Look, and has also published short fiction. She is also no stranger to rebellion, having founded Science is Vital, a well-known grassroots organization campaigning for UK research funding. Born and raised in the United States, Jennifer became a naturalized British citizen and now lives in Gravesend, Kent (not far from the action in this novel) with her husband and son.