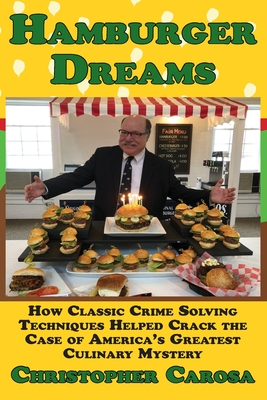 Within the mists of time lie buried uncoverable answers to history's most compelling questions.
What really happened to the lost continent of Atlantis?
How did ancient Greeks possess the technology to create the Antikythera mechanism and what did they use it for?
Why did hundreds of people suddenly start dancing in the streets of Strasbourg during July 1518 and then, just as suddenly, die?
Who was Jack the Ripper?
And, finally, where did Amelia Earhart end up?
These questions pale to the ultimate mystery. It's the mystery behind something that has touched us all and will continue to touch generations into the future. It's the mystery behind a trillion-dollar industry. It's the mystery behind something so simple, so common, so obvious, that no one bothered to write it down. It is, the birth of the world's first hamburger. Or was the first hamburger served in 1900 at Louis Lunch, a diner in New Haven, Connecticut as reported by the New York Times and recognized as such by the Library of Congress? Or did Fletcher "Old Dave" Davis first place a ground beef patty on bread in "the late 1880's" as suggested by the Dallas Morning News? And, if the hamburger really was first invented in 1885 either by Charles Nagreen at the Outagamie County Fair in Seymour, Wisconsin, or by Charles and Frank Menches at the Erie County Fair in Hamburg, New York, which fair occurred first?Cynics will tell you we can never discover who really sold the first hamburger just because there is no smoking gun proof. By coincidence, literature's most famous detective appeared at the same time the first hamburger was sold. Would he have conceded just because the case lacked a credible eye witness? Would he say it's impossible to know who among the usual suspects most likely sold the first hamburger? No. Sherlock Holmes didn't rely on the existence of a smoking gun. He used something more convincing: the power of deduction. Award-winning academic researcher and writer Christopher Carosa uses these classic crime solving techniques and other investigative tools to crack the mystery behind who sold the world's first hamburger. In Hamburger Dreams, Carosa submits his findings in much the same way a DA might present a final summation to the jury.