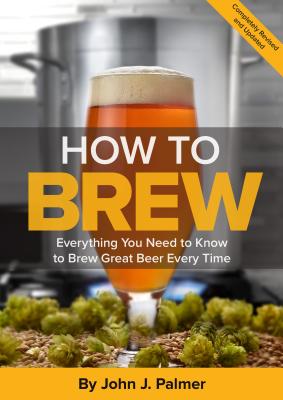 Everything You Need to Know to Brew Great Beer Every Time

How To Brew: Everything You Need to Know to Brew Great Beer Every Time (Fourth Edition) By John Palmer Fully revised and updated, How to Brew is the definitive guide to making quality beers at home. Whether you want simple, sure-fire instructions for making your first beer, or you're a seasoned homebrewer working with all-grain batches, this book has something for you. John Palmer adeptly covers the full range of brewing possibilities--accurately, clearly and simply. From ingredients and methods to recipes and equipment for brewing beer at home, How to Brew is loaded with valuable information on brewing techniques and recipe formulation. A perennial best seller since the release of the third edition in 2006, How to Brew, is a must-have to update every new and seasoned brewer's library. This completely revised and updated edition includes: - More emphasis on the "top six priorities" sanitation, fermentation temperature control, yeast management, the boil, good recipes, and water. - Five new chapters covering malting and brewing, strong beers, fruit beers, sour beers, and adjusting water for style. - All other chapters revised and expanded: - Expanded and updated charts, graphs, equations, and visuals. - Expanded information on using beer kits. - Thorough revision of mashing and lautering chapters: - Expanded tables of recommended times and temperatures for single-infusion, multiple-step, and decoction mashing. - Complete discussion of first wort gravity as a function of water to grist ratio. - Complete revision of infusion and decoction equations. - Revised and updated information on managing your fermentation: - Yeast pitching and starters. - Yeast starter growth factors. - Yeast and the maturation cycle. - And much more.

John Palmer is one of the most recognized names in homebrewing today. The author of three books and countless articles, he enjoys applying practical engineering know-how to the art and science of brewing beer. Through his bestselling Brewers Publications title, How to Brew: Everything You Need to Know to Brew Great Beer Every Time, John has helped hundreds of thousands of readers learn to successfully brew their own beer at home. Palmer co-authored two other books on brewing: Brewing Classic Styles: 80 Winning Recipes Anyone Can Brew with homebrewing legend and Heretic Brewing Company founder Jamil Zainasheff and Water: A Comprehensive Guide for Brewers, the definitive guide to water chemistry for brewing with Colin Kaminski, former brewmaster at Napa's Downtown Joe's Brewery and Restaurant. Palmer is involved in many scientific and professional brewing associations. He left a career in aerospace research and development, and metallurgy in 2011 to found Palmer Brewing Solutions, Inc. He now focuses on brewery consulting and product development with key brewing industry manufacturers and serves as publications director for the Master Brewers Association of the Americas. When he's not brewing beer, writing about beer, or developing brewing equipment, John enjoys woodturning, blacksmithing, and reading sci-fi/fantasy. He lives in California with his wife, three children, and his cat, Shadow.
Loading...
or support indie stores by buying on