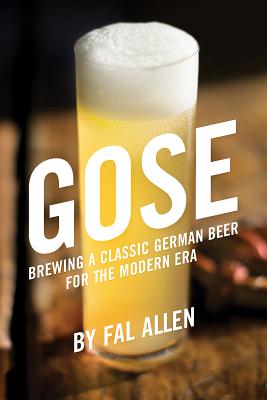 Brewing a Classic German Beer for the Modern Era

Explore the sensation of tart, fruity and refreshing Gose-style beers, popular in Germany centuries ago and experiencing a renaissance today. Follow the development of this lightly sour wheat beer as it grew, then bordered on extinction, before surging into popularity due to the enthusiasm and experimentation of American craft brewers. Gose explores the history of this lightly sour wheat beer style, its traditional ingredients and special brewing techniques. Discover brewing methods from the Middle Ages and learn how to translate them to modern day beer. Learn about salinity, spices, and lactic acid as you experiment with Gose recipes from some of the best-known craft brewers of our time. This refreshing journey captures the innovation and experimentation that is occurring within the style and help you brew your own Gose-style beers."There is more to Gose than just coriander and salt. Fal Allen reveals its rich history while giving the reader an in-depth introduction to both modern and historic Gose-style beers, their ingredients, and their quirks. Follow Gose on its journey from the imperial city of Goslar into the Gosenschaenke of Leipzig and on to craft breweries in the US and the world." --Benedikt Rausch, Wilder Walt, wilder-wald.com Fal takes us on a Dickensian journey through time, detailing what was, what is, and what may become of our beloved and mostly misunderstood Gose. Fal covers the depth and breadth of brewing Gose, with tips, cleaver tricks, and tasty anecdotes along the way. Whether you're a beer newbie or a master brewer, this book is required reading for all." --Kristen England, Head Brewer, Bent Brewstillery.

Fal Allen started brewing professionally in 1988 for Redhook Brewery in Seattle, Wash. In 1990, he moved to Pike Place Brewery where he was the head brewer for eight years. In 1999, he was awarded the Brewers Association's Russell Schehrer Award for Innovation and Achievement in Craft Brewing. He took over as the general manager at Anderson Valley Brewing Company in Northern California in 2000. Starting in 2005 he did a five year stint as brewmaster for Archipelago Brewing (a division of Asia Pacific Breweries) in Singapore, before returning to Anderson Valley as Brewmaster in 2010. Allen's writing credits include Gose, co-authoring Barley Wine, a four-part series on Microbiology and lab work in Brewing Techniques and more than 40 articles in American Brewer, The New Brewer, Zymurgy, MBAA Technical Quarterly, Celebrator, Malt Advocate, and other publications. Allen resides in Navarro, California.
Loading...
or
Not Currently Available for Direct Purchase