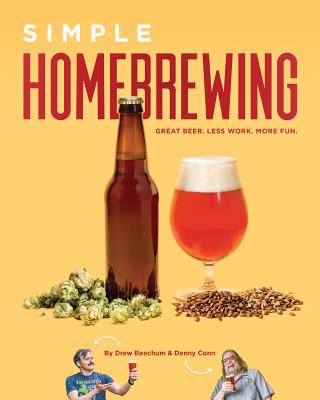 Have you ever found yourself doing less and less homebrewing, or being too intimidated to take up the brewing to begin with? Let Drew Beechum and Denny Conn help you brew the best possible beer with less work and more fun Simple Homebrewing simplifies the complicated steps for making beer and returns brewing to its fundamentals. Explore easy techniques for harnessing water, malted barley, hops, and yeast (along with a few odd co-stars) to create beer. Pick up tips and tricks for a range of brewing challenges like adjusting your brewing liquor, working with adjunct ingredients, controlling fermentation, and brewing wild beers. The authors guide you from extract brewing to all-grain batches and explain the simple philosophy of recipe design and small-batch brewing. Learn how to evaluate different types of malt and hops by tasting, crushing, and steeping them, and use this to build your flavor vocabulary. Denny and Drew also share ideas on how to make technology work for you by taking a look at brewing gadgets, from fancy fermentation jackets and expensive (but convenient) all-in-one "robot" brewing systems, to bucket heaters, swamp coolers and do-it-yourself PID controllers made from inexpensive and commonly available microprocessors. Drew and Denny's mantra is "Brew the best beer possible, with the least effort possible, while having the most fun possible." Throughout, the focus is on helping you develop a simple, thoughtful process to make homebrewing more accessible and enjoyable. Wisdom is imparted in tones both reassuring and amusing, and the basics are broken down into easily remembered chunks. The authors also feature interviews with an eclectic group of brewers from the Americas, who add their own take on the brewing process and how they have made it work for them. Get a feel for recipe design by looking at a few handy templates for Pilsner, pale ale, IPA, double IPA, stout, tripel, and saison; or try your own bottom-up or top-down approach after reading Denny and Drew's advice. Along the way you will find over 40 recipes, ranging from the simplest of pale ales, American lagers, tried and tested altbier recipes, and delicious rye IPAs, to Old and New World barleywine, quick tripels, Scotch ale mashed overnight, king cake ale, purple corn beer, and Catherina sour. Marvel at how mushrooms can be used in beer and tremble at the thought of a bourbon barrel-aged barleywine made with ghost pepper. Even experienced homebrewers can learn from this dynamic duo, as Simple Homebrewing features expert advice for brewers of all levels.

Denny Conn brewed his first batch of homebrew in 1998 and has since brewed 500+ more. He is a nationally-ranked Beer Judge Certification Program judge and served on the American Homebrewers Association(R) Governing Committee for nine years. His homebrew recipes have been brewed by several commercial breweries in both the United States and Europe. Denny was a contributing author to Craft Beer for the Homebrewer and co-authored Experimental Homebrewing and HomeBrew All-Stars with Drew Beechum. He is the co-host of the Experimental Brewing Podcast. He lives in Noti, OR with his wife, five cats, and two dogs. Drew Beechum has been brewing and writing about brewing since he first picked up a kettle in 1999. He is the author of The Everything Homebrewing Book, The Everything Hard Cider Book, and co-authored Experimental Homebrewing and HomeBrew All-Stars with Denny Conn. Drew has also written for Zymurgy(R) and Beer Advocate magazines, and is co-host of the Experimental Brewing Podcast. He lives in Pasadena, CA, with his lovely wife and loyal army of dogs and cats, and has a dedicated brewery in his home.
Loading...
or support indie stores by buying on