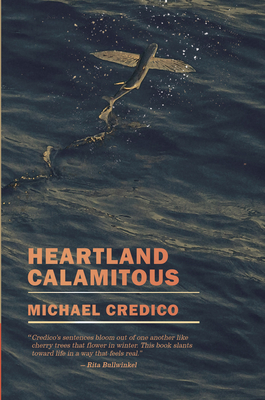 Emerging from deep in America’s hinterland, Michael Credico’s flash fiction portrays an absurdist, exaggerated, and bizarre vision of the Midwest known as the heartland. The stories are clipped views into a land filled with slippery confusion and chaos, mythical creatures, zombies, comic violence, shapeshifters, and startling quantities of fish. The characters of Heartland Calamitous are trying to sort out where, who, and what they are and how to fit into their communities and families. Environmental destruction, aging, ailing parents, apathy, and depression weigh on the residents of the heartland, and they can’t help but fall under the delusion that if they could just be somewhere or someone or something else, everything would be better. This is a leftover land, dazed and dizzy, where bodies melt into Ziplock bags and making do becomes a lifestyle.

The stories of Heartland Calamitous, often only two or three pages long, reveal a dismal state in which longing slips into passive acceptance, speaking to the particular Midwestern feeling of being stuck. They slip from humor to grief to the grotesque, forming a picture of an all-to-close dystopian quagmire. With this collection, Credico spins a new American fable, a modern-day mythology of the absurd and deformed born of a non-place between destinations.

"In his compelling collection of stories—most only a few pages long—Michael Credico marshals bold, creative images to depict a grim Midwest dominated by slaughterhouses and fast food restaurants. . . . Echoing the work of Franz Kafka and Joseph Heller, the intense, slippery images animating these powerful stories bring to life alienated characters and are challenging and surprising at every turn."
— Foreword Reviews starred review

"Like the Coen brothers by way of Samuel Beckett with a zombie or two thrown in for good measure, Michael Credico’s clipped style and deadpan humor mimics and complicates the 'Midwestern nice' that flyover country is infamous for, blazing new trails all his own."
— Chicago Review of Books

Longlisted
— The Story Prize for Short Story Collections Published in 2020

“Michael Credico in his book of palpating, pulsating fictions, Heartland Calamitous, captures perfectly the diastolic deadpanned dissonance in the heart of the heart of the country. Here one begins to sense what it feels like to believe you inhabit the goddam center of the world at the exact same time you know in your bones you are smack dab in the middle of blanking nowhere.  Here the blue-bibbed and gingham-aproned American Gothic meets up with quadruple bypassed Vladimir and Estragon at some godforsaken mumbling murmuring four-chambered potholed crossroad of they-went-that-a-way America. These arresting fictions are your punched tickets back home, your itinerary to the scheduled crash landings in this leaden leaking lake-effected fever dreamt flyover.”

— Michael Martone author of Brooding and The Moon Over Wapakoneta

"Credico's sentences bloom out of one another like cherry trees that flower in winter. This book slants toward life in a way that feels real."

"Chiseled and coiled like a hungry serpent with a wicked sense of humor, Michael Credico's stories lure you in with terrific sentences and just when you expect to be crushed, embrace you with an unexpectedly tender heart. Denis Johnson meets Donald Barthelme at a dive where Gordon Lish tends bar and Amy Hempel rules the jukebox. Don't believe me, believe Credico. Read this book. "
— Imad Rahman

“In this warped, deliciously brutal debut collection, Michael Credico spins variations on a common Midwestern malady: feeling stuck and looking for a way out. His oddly alienated characters find themselves restrained again and again—choked by a too-tight necktie, caught in a glue trap, running a directionless road—trapped, like Cleveland’s own Howard the Duck, in a world they never made.”

— David Giffels, author of Furnishing Eternity and The Hard Way on Purpose

Michael Credico lives in Cleveland, Ohio, and his fiction has been published in a variety of outlets, including Black Warrior Review, Columbia Journal, and Denver Quarterly.