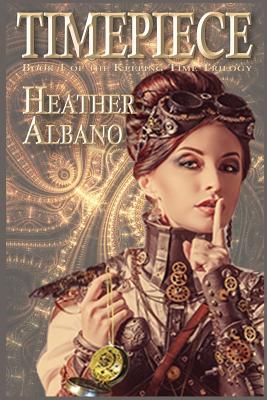 You only THINK you know what happened at Waterloo.

If Jane Austen and Mary Shelley had locked H. G. Wells in a dungeon and revised his wildest work, the result would have been something like this rollicking steampunk time-travel adventure that still manages to be a comedy of manners. Albano's delightful characters confront the not only monsters and killer robots, but their own divided loyalties between personal happiness and the fate of their country. - Ken Schneyer, The Law & the Heart

It's 1815, and Wellington's badly-outnumbered army stares across the field of Waterloo at Napoleon's forces. Desperate to hold until reinforcements arrive, Wellington calls upon a race of monsters created by a mad Genevese scientist 25 years before.

It's 1815, and a discontented young lady sitting in a rose garden receives a mysterious gift: a pocket watch that, when opened, displays scenes from all eras of history. Past...and future.

It's 1885, and a small band of resistance fighters are resorting to increasingly extreme methods in their efforts to overthrow a steampunk Empire whose clockwork gears are slick with its subjects' blood.

Are these events connected?

Oh, come now. That would be telling.

"Waterloo and time travel are made for each other and Heather Albano has done a wonderful job of giving us a delightful cast of characters, tasked with stitching together the proper nineteenth century while fending off several monstrous alternatives. Propulsive adventure with historical insight." - Kim Stanley Robinson, 2312 and Red Mars