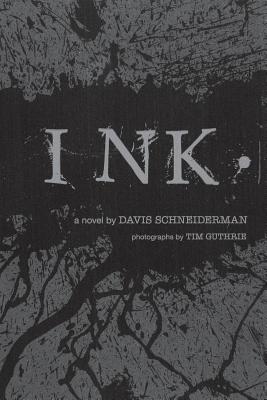 INK. is the third book of Davis Schneiderman's DEAD/BOOKS trilogy, after BLANK (2011) and SIC] (2013) Th(ink) of it: A book that you read by looking at. A book that you hold and never read. A book that looks back at you looking. A book that is the electronic publishing future. A book for the dark days ahead. INK. is all dark, a smear of solid ink over every surface of the book. The fine-art edition of INK. uses ink sourced from Schneiderman's blood -inquire at dschneid at] lakeforest dot]edu. Further, Schneiderman will also put his library at risk. Any person who buys INK. may choose a book from his library, which Schneiderman must then destroy. He will send evidence of the remains to the purchaser. Write to: dschneid at] lakeforest dot] edu for details.

DEAD/BOOKS is a trilogy of conceptual works by Davis Schneiderman from Jaded Ibis Productions and its imprint Jaded Ibis Press: BLANK (2011), SIC] (2013) and INK. (2015).

BOOK 1: BLANK is a 200+ page book whose text offers only 20 enigmatic chapter titles like, "A Character Broods" and "They Encounter An Animal," with audio remixes by Dj Spooky and pyrographic art by pyrographic artist Susan White.

BOOK 2: SIC] includes public domain works under Schneiderman's name, including everything from the prologue to The Canterbury Tales to Wikipedia pages to genetic codes. The fine-art edition of SIC] contains a pathogen that readers may deploy onto the text, to become sick- sick about copyright. SIC] contains images from visual artist Andi Olsen, and an introduction from Oulipian Daniel Levin Becker.

Is this the end? Probably.

Davis Schneiderman turns 41 on Dec 27, 2015. He's been writing for years. He has a loyal but small readership who says nice things about his work in reviews. He's happily married, for 16 years, with two daughters. He cuts books for fun. Schneiderman long ago began asking the key question: why write? Finally, after years of publishing books like the largely blank, BLANK, and the plagiarized SIC], he's come to understand that the question can be formulated only through ink itself.

It's all been great. But why bother?

DAVIS SCHNEIDERMAN has spent more than 20 years as a writer, artist, and performer, and in that time he has written a number of well-received novels. His works include the DEAD/BOOKS trilogy (Jaded Ibis), including the blank novel BLANK, the plagiarized novel [SIC], and the ink-smeared novel INK. (from Jaded Ibis Press); along with the novels Drain (Northwestern 2010), Abecedarium (w/Carlos Hernandez) (Chiasmus, 2007), and Multifesto: A Henri d'Mescan Reader (Spuyten Duyvil Press 2006; Remix edition 2013). Schneiderman has had the pleasure of collaborating with writers and artists such as Regina Taylor, Paul D. Miller aka. Dj Spooky, Roxane Gay, Oulipian Daniel Levin Becker, Blake Butler, Matt Bell, Lance Olsen, Lidia Yuknavitch, Cris Mazza, and many others. He co-edited the collections Retaking the Universe: Williams S. Burroughs in the Age of Globalization (Pluto 2004), recently republished for its ten-year anniversary at RealityStudio.com; The Exquisite Corpse: Chance and Collaboration in Surrealism's Parlor Game (Nebraska, 2009); and The &NOW AWARDS: The Best Innovative Writing (vols. 1 and 2). He has written on Burroughs for many publications, including The Journal of Beat Studies (2013), and Naked Lunch @ 50: Anniversary Essays (Southern Illinois University Press, 2009). His writing has appeared in numerous publications including Harpers.org and The Chicago Tribune; he blogs for The Huffington Post. He is Associate Dean of the Faculty and Director of the Center for Chicago Programs, as well as Professor of English and Director of Lake Forest College Press/ &NOW Books at Lake Forest College near Chicago.
Loading...
or support indie stores by buying on