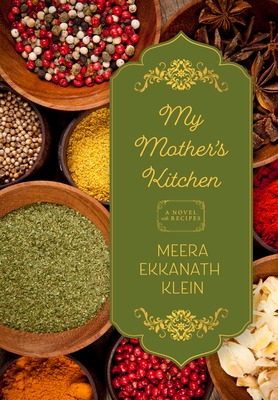 A Novel with Recipes

My Mother's Kitchen is an enchanting place filled with promise, change and good food. If the weathered walls of this magical room could talk they would tell the story of Meena and her childhood life. Each chapter is a slice in her young life and depicts her spunk and youthful spirit. A visit to the local Fruit and Flower Show becomes an adventure as told by Meena. Her distress at finding out about her aunt's dark secret or her joy of making a new friend are all told in her naïve, yet pure voice. Her mother is a central character in her life and it is no wonder that the kitchen is a special place of healing and rejuvenation, not only for Meena but for other characters like Kashi and Ayah.

Award-winning author, Meera Ekkanath Klein, deftly weaves her love of cooking and story-telling into an irresistible tale.  My Mother’s Kitchen: A novel with recipes (2014, Homebound Publications) was selected as a Finalist in the 2015 Beverly Hills International Book Awards in the Multi-Cultural Fiction category.

She was one of 40 authors at the celebrated "2015 Authors on the Move" fundraiser for the Sacramento Library Foundation dinner and auction.  She was featured on Capital Public Radio on April 2, 2015 and interviewed by host Beth Ruyak. She has participated in the "Local Author Festival" at the Sacramento Library and will be a presenter at the "Great Valley Book Fest" in October.

A former newspaper reporter and columnist, Klein, honed her writing skills in a busy newsroom. She mastered the art of Indian cooking in her own mother’s kitchen in the beautiful Blue Mountains or Nilgiris of south India.

Klein currently lives in northern California and is completing a sequel to My Mother’s Kitchen, as well as a YA book based on Indian legends and mythology