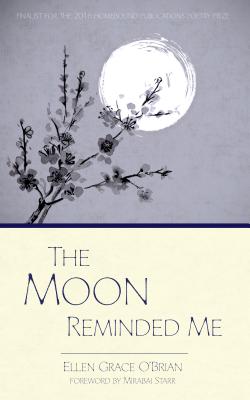 The Moon Reminded Me

In her luminous poems, Ellen Grace O’Brian manages to braid contemporary moments of everyday life with ancient spiritual teachings—the sight of a hummingbird’s red throat, bread on the table, a couple’s quarrel, a mother’s advice—become doorways into the divine mystical heart. The Moon Reminded Me, subtly laced with Sanskrit, gives us an insight into a poet who bridges two worlds eloquently enough to take us along with her. Sandhya, the numinous time for stepping into the temple, suddenly becomes this moment, now.

Yogacharya Rev. Ellen Grace O’Brian, M.A., is a teacher, writer, and spiritual director of the Center for Spiritual Enlightenment (CSE) with headquarters in San Jose, California, USA. CSE is a Kriya Yoga Meditation Center serving people from all faith backgrounds who are seeking Self- and God-realization. She was ordained to teach in 1982 by Roy Eugene Davis, a direct disciple of Paramahansa Yogananda who brought Kriya Yoga from India to the West.

Yogacharya O’Brian has taught yoga philosophy and meditation practices for spiritually conscious living at retreats, spiritual centers, and conferences throughout the US and internationally for over three decades. She is the author of several books on spiritual practice published by CSE Press, including Living the Eternal Way: Spiritual Meaning and Practice in Daily Life; A Single Blade of Grass: Finding the Sacred in Everyday Life; and Living for the Sake of the Soul, as well as three volumes of poetry, One Heart Opening: Poems for the Journey of Awakening; The Sanctuary of Belonging; and The Moon Reminded Me published by Homebound Publications. She writes regularly for Truth Journal magazine, is the editor of Enlightenment Journal, a quarterly yoga magazine, and host of The Yoga Hour, a weekly radio program and podcast with Unity Online Radio.

She is the founder and president of Meru Institute, offering certification programs, leadership training, and education in Yoga, Ayurveda, and Community Ministry since 1996 and leads Carry the Vision, a community education nonprofit organization teaching principles and practices of ahimsa to all sectors of society. Yogacharya O’Brian served as the Vice Chair of the Board of Trustees of the Parliament of the World’s Religions and is a recipient of several community service awards including the prestigious 2015 Mahatma Gandhi Award for the Advancement of Religious Pluralism by the Hindu American Foundation. She lives in Santa Cruz, California with her husband Michael. They have three fabulous grown children and two precocious grandchildren.

Mirabai Starr, MA, is an author, translator of the mystics, and a leading voice in the emerging interspiritual movement, using fresh, lyrical language to help make timeless wisdom accessible to a contemporary circle of seekers.

She has received critical acclaim for her revolutionary new translations of Dark Night of the Soul, by 16th-century Spanish mystic St. John of the Cross; The Interior Castle and The Book of My Life, by St. Teresa of Avila; and The Showings of Julian of Norwich.

She is author of the six-volume Sounds True series, Contemplations, Prayers, and Living Wisdom; a poetry collection, Mother of God Similar to Fire, a collaboration with iconographer, William Hart McNichols; God of Love: A Guide to the Heart of Judaism, Christianity and Islam, which was named the winner of the New Mexico/Arizona Book Award for Religion and one of the Best Spiritual Books of 2012 by the website Spirituality & Practice, and won the 2014 Nautilus Gold Award for Religion and Spirituality in the Western Traditions, and her newest book is Caravan of No Despair: A Memoir of Loss and Transformation.

Daughter of the counter-culture, Starr was born in New York in 1961 to secular Jewish parents who challenged institutionalized religion and were active in the anti-war protest movement of the Vietnam era. In 1972, the family embarked on an extended road trip that led them to settle in the mountains of Taos, New Mexico. There, they embraced an alternative, "back-to-the-land" lifestyle, in a communal effort to live simply and sustainably, values that remain important to Starr to this day.

As a teenager, Starr lived at the Lama Foundation, an intentional spiritual community in New Mexico that has honored the world's spiritual traditions since its inception in 1968. The foundation's focus has always rested on the mystical heart of each path, and Starr was trained from an early age to recognize and celebrate the interconnections between and among all faiths.

Formerly an adjunct professor of philosophy and world religions at the University of New Mexico for 20 years, Starr is a certified grief counselor and speaks and teaches nationally and internationally on the teachings of the mystics, contemplative practice, and grief as a spiritual practice. Her talks and retreats incorporate silent meditation, interspiritual chanting, sacred poetry, and deep dialog. She blogs for the Huffington Post.