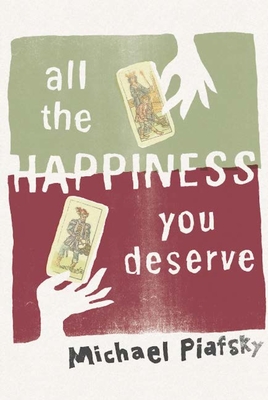 All the Happiness You Deserve (Paperback)

"Brilliant . . . Michael Piafsky is a word wizard . . . with prose so dramatic and suspenseful that the book becomes impossible to put down." --ForeWord Reviews

This dazzling debut novel follows its midwestern narrator from childhood to old age as he examines the touchpoints and transitions that define a life. Scotty's languorous journey takes him through the pivotal experiences common to so many American men: a middle-class childhood, college, marriage, fatherhood, cross-country moves, business success and failure, and aging. Piafsky frames his story with Tarot images that speak to the disconnectedness of society and the perplexing isolation of the human condition.

Michael Piafsky is an associate professor and the director of creative writing at Spring Hill College in Alabama. The Montreal native earned an MA in creative writing from Johns Hopkins University and a PhD from the University of Missouri. A former editor of the Missouri Review, Piafsky has published fiction and nonfiction in journals such as Meridian, Epic, and Bar Stories, among others, and an excerpt from All the Happiness You Deserve, his first novel, was published by the Jabberwock Review and nominated for a Pushcart Prize.
or support indie stores by buying on
Copyright © 2020 American Booksellers Association