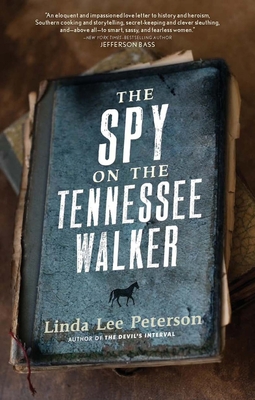 The Spy on the Tennessee Walker (Maggie Fiori Mystery #3)

Impossible to put down. Sparkling dialogue, references both musical and literary, and an offbeat cast of believable characters make the pages fly by.--Library Journal, starred review

A fast-paced, intelligent tale of intrigue that will keep readers guessing until the refreshing end.--Publishers Weekly, starred review

Maggie Fiori, San Francisco magazine editor and amateur sleuth, gets a package that leads her to investigate a family scandal going back to the Civil War. Why was her great-great-great grandmother imprisoned for bigamy and espionage? Was she a criminal or a hero? Did she support the Confederates or the Union? Maggie's husband, Michael, joins her on the trip to Oxford, Mississippi, to dig deep and solve the mystery.

Combining an engaging contemporary mystery with a carefully researched Civil War setting and nineteenth-century characters, The Spy on the Tennessee Walker will appeal to Civil War and American history buffs as well as fans of modern mysteries and historical fiction.

Linda Lee Peterson is the author of two previous Maggie Fiori mysteries, Edited to Death and The Devil's Interval. She has also written several nonfiction books, including The Stanford Century, On Flowers (Chronicle), and Linens and Candles (HarperCollins) and has written for many national publications, including the Chicago Tribune. A longtime San Franciscan and an alumna of Stanford University, Peterson now lives in Portland, Oregon.
Loading...
or support indie stores by buying on