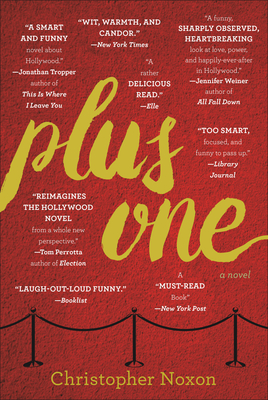 "Behind every great man there's a great woman . . . and in Noxon's telling, behind every great woman there's a charming, deeply conflicted guy (sometimes holding a very expensive handbag). Hilarious and unflinching, Plus One is a funny, sharply observed, heartbreaking look at love, power, and happily-ever-after in Hollywood."--Jennifer Weiner, author of Who Do You Love, The Next Best Thing, and Good in Bed

New in paperback after a successful run in hardcover, Christopher Noxon's debut novel Plus One is a comedic take on breadwinning women and caretaking men in contemporary Los Angeles. Alex Sherman-Zicklin is a midlevel marketing executive whose wife's fourteenth attempt at a TV pilot is produced, ordered to series, and awarded an Emmy. Overnight, she's sucked into a mad show-business vortex and he's tasked with managing their new high-profile Hollywood lifestyle. He falls in with a posse of Plus Ones, men who are married to women whose success, income, and public recognition far surpasses their own. What will it take for him to regain the foreground in his own life?

Christopher Noxon is an accomplished journalist who has written for such publications as The New Yorker, Details, Los Angeles Magazine, Salon, and The New York Times Magazine. His first book, Rejuvenile: Kickball, Cartoons, Cupcakes, and the Reinvention of the American Grown-Up (Crown), earned him interviews on such shows as The Colbert Report and Good Morning America and generated features in USA Today, The Wall Street Journal, and Talk of the Nation; Ira Glass of This American Life called the book "an eye-opener." Noxon happens to be married to a top TV writer/producer and does the school chauffeuring for their three children, so he knows whereof he speaks regarding Plus Ones. He lives in Los Angeles.
Loading...
or
Not Currently Available for Direct Purchase