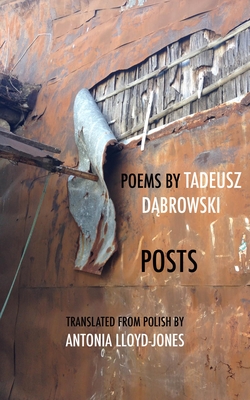 A rising star in Polish letters explores faith, eros, death and the making of poems in these deft, personal musings.

Hailed in Poland as the hope of Polish poetry and the inheritor of its metaphysical tradition, Dabrowski offers these posts from city streets and trains, his bedroom and Skype, a hospital and his own notebook, employing colloquial language to confront weighty subjects: And right here /poetry appears, and forces a stag to bolt / in front of the hood of your car.

Tadeusz Dabrowski is the author of six books and recipient of numerous awards, and his work has been translated into 20 languages.

Antonia Lloyd-Jones's brilliant translations have twice won her the Found in Translation Award.

Tadeusz Dabrowski (b. 1979) is a poet, essayist, and critic whose work has been published in major journals in Poland and abroad, including The New Yorker, Boston Review, Agni, American Poetry Review, Tin House, Harvard Review, Poetry Ireland, Frankfurter Allgemeine Zeitung, and many others. He has won numerous awards, including the Bienek Prize (2014), the Koscielski Prize (2009), the Hubert Burda Prize (2008), the Prize of the Foundation for Polish Culture (2006), and was nominated for Poland's most prestigious award, the NIKE, in 2010. He has published six volumes of poetry in Poland, and his work has been translated into 20 languages. He edits the literary bimonthly Topos and is the art director of the European Poet of Freedom Festival. Dabrowski lives in Gdansk on the Baltic Coast of Poland. Antonia Lloyd-Jones translates from Polish, and has twice won the Found in Translation award. She has translated works by several of Poland's leading contemporary novelists and reportage authors, crime fiction, poetry, and children's books. She is a mentor for the Emerging Translators' Mentorship Programme (run by Writers Centre Norwich), and co-chair of the UK Translators Association.
Loading...
or support indie stores by buying on