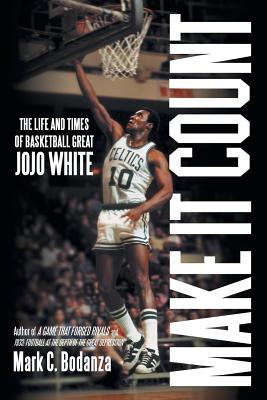 The Life and Times of Basketball Great Jojo White

In an age dominated by overhyped athletes who are sometimes short on character, JoJo White's story offers a refreshing look back at one athlete's career-a career that was the product of genuine good values. In Make It Count, author Mark C. Bodanza presents a biography of a man who triumphed both on and off the basketball court.

White's story is interwoven with ours as a nation. His basketball days were shaped by-and in a few cases, helped shape-events of monumental importance. Race relations, the war in Vietnam, and political tumult across the land punctuated White's years as both a Kansas Jayhawk and Boston Celtic. Bodanza shows how, through his years on the court, the point guard from St. Louis, Missouri, maintained a steady contribution to the game that became his passion while still a child. With each passing game, season, or team that formed a part of his playing days, White stayed true to principles learned before he donned his first high-school uniform.

Make It Count narrates a compelling chronicle of a sports career complete with drama, triumphs, and losses, as well as an affirmation that hard work has its reward. In life, as in basketball, JoJo White's approach to each opportunity that a new day presents has always been the same: make it count.